The Second Nature festival became the Chroniques biennial that takes place in various spots between Aix-en-Provence and Marseille. This first edition, artistically directed by Mathieu Vabre, welcomed Québec as guest of honor.

The body in urban space 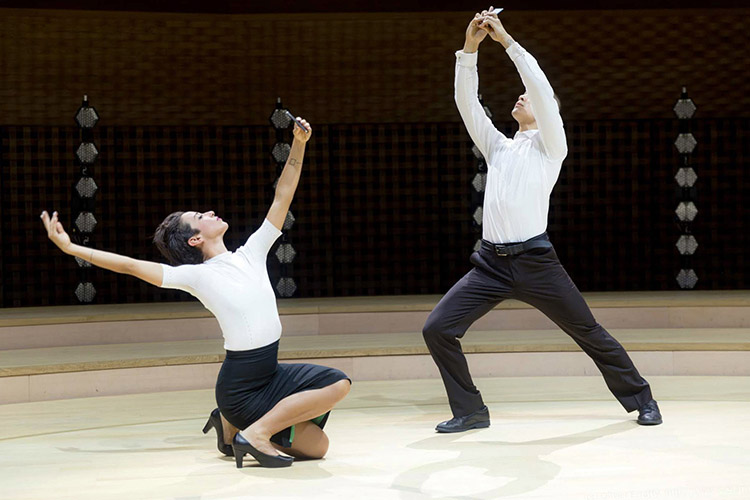 At The Camp, the Chroniques Biennial starts with the International Marketplace for Digital Art from Montreal. The Camp, surrounded by nature, is a place “for exploring the future” by combining the values of well-being and of innovation. Values that Rocio Berenguer stages with the Ergonomics performance. With grace as well as humor, it evokes our bodies that we wish were as smart as our cellphones. The performers’ postures are presented to us as suggestions to live better with our bodies in the urban space. Everything, in this choreography turning the body into a responsive application, appears as extremely controlled. The esthetic is resolutely corporate, from the images to the sounds, costumes, and dialogues. However, what is frightening, in the world which the fictive Ergonomics company prepares us for, is perfection. An extreme perfection where we question whether the human, whose body sometimes stumbles, and having thoughts that are often mixed up, still has its place or not. During this participative performance where we play a game which brings us closer to a world that the tech companies vow to make better, there are moments when we would like to say: stop! 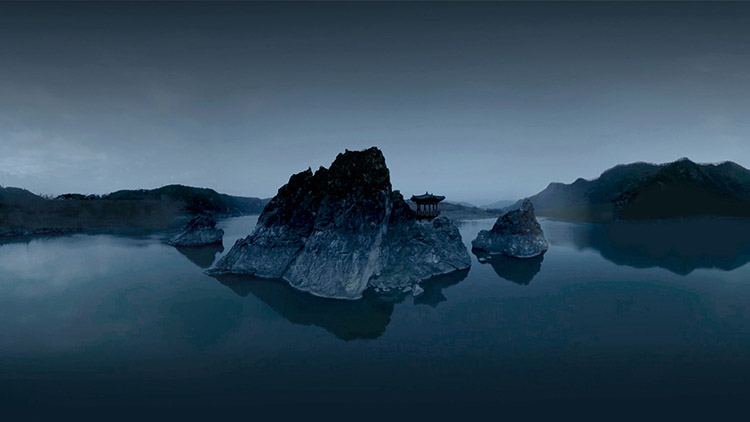 In this Biennial, and still at The Camp, digital technologies are also a way to experience memories of those who were martyred. Korean artist HeeWon Lee gathered fragments of poignant testimonies to create The Rain. The action, as soon as we put on a virtual reality headset, takes place over a landscape reminiscent of the Orient. We are “imbedded” in a journey between sky and earth with a heavy rain that is irremediably driving us towards sadness. Our bodies are deprived of their weight, and we are literally flying aside the souls of women who were abducted when they were still children, in order to satisfy sexual urges of Japanese soldiers during WWII. These souls, which express themselves through voices, are waiting to be released. However, governments struggle too often to acknowledge their predecessors’ mistakes. Therefore, it takes time for past sufferings to be officially admitted. 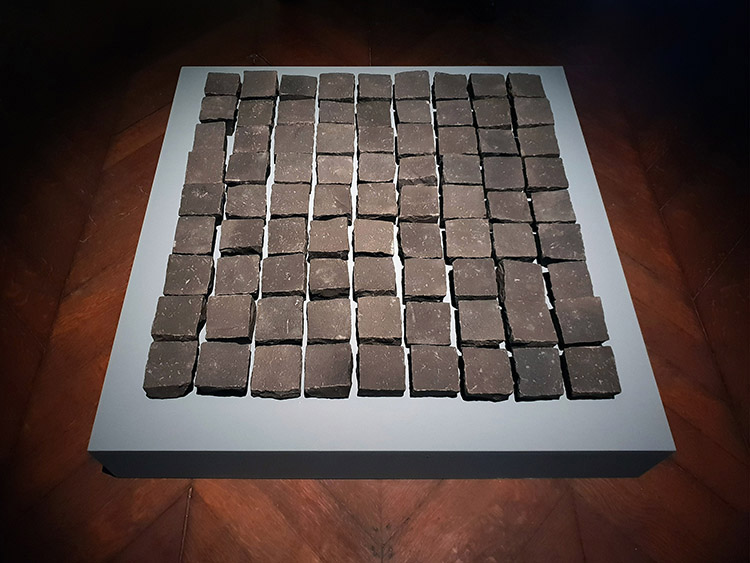 In Aix-en-Provence, the Gallifet Art Center, partner of the Chroniques Biennial, presents an exhibition entitled Inverted Landscapes. There, we discover Florian Schonerstedt’s Révolution au mètre carré installation. It is composed of a cobblestone grid placed on a plinth which is part of the artwork. And it is again with a virtual reality headset that we are able to experience it another way. It is then possible to grasp the cobblestones one after the other in order to act, (as the title incites, in this anniversary year of the student and worker revolt of 1968) by throwing them, but only into the void. Because the projectiles, in this third industrial revolution which American essayist Jeremy Rifkin is teaching us the opportunities, seem to have lost their weight and mass, hence their threat. That is to say that the virtual cobblestones are slowly moving away in their never-ending fall, while they are subdued to a virtual breeze. Indeed, the world has changed, and if we burn a few tires in front of occupied factories, Facebook groups have replaced political meetings and there are tweets even more offensive than the cobblestones of yesteryear. 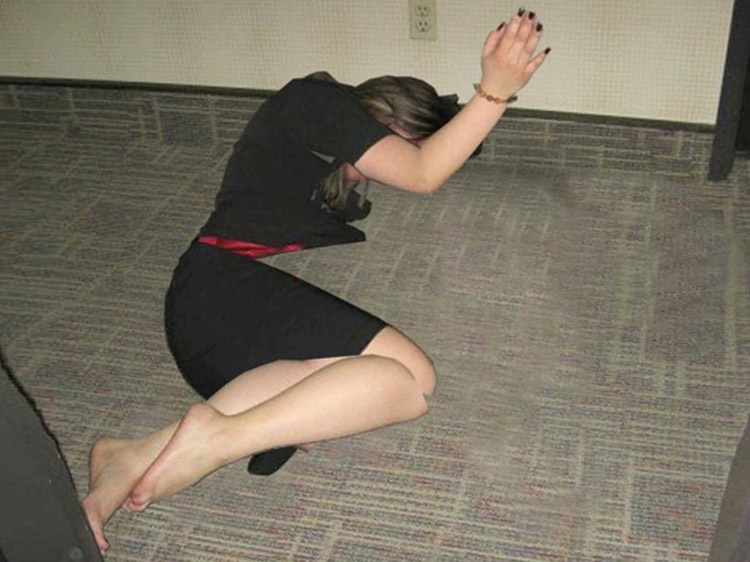 Still in Aix-en-Provence, at the Vasarely Fondation, the Gamerz festival contributes to the Chroniques Biennial with an exhibition entitled Digitale Défiance, gathering the works of five artists, including Harm van den Dorpel with his Resurrection animation series. He puts together non-professional online images as artists of the post-Internet trend do. All images represent young people sleeping in particularly uncomfortable positions. Thus, we understand that these photographs were taken without their knowledge. But the artist animates them by dismembering their bodies so that they escape Earth’s gravity. In positions that are physically impossible, they run away from harassing looks, some of them humiliating, by leaving the picture frame. The title of this series encourages us to consider that these inert bodies are coming back to life. As the bodies rising in ascension paintings, they escape the laws of physics. 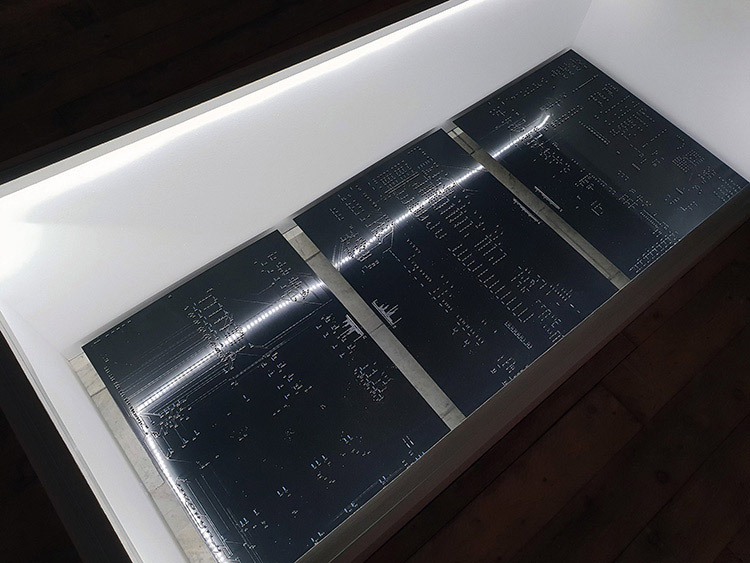 In Marseille, the Grands Bains Douches gallery exhibits Quentin Destieu’s personal Master/Slave. The latter practices a form of media archaeology, through sculptures like A cœur ouvert. He encourages us to reconsider the functional beauty of the enlarged drawing of a microprocessor, presented behind glass like a genuine relic in its light sarcophagus. It is the iconic Intel 4004, dating back to the 1970s, and considered by German media theoretician Friedrich Kittler as the “last historic act of writing”. Since then, because of miniaturization, computers have been the ones to draw the core of other computers. This idea that machines design other machines brings back the worst disaster scenarios of science-fiction novels or movies. But, from a more symbolic point of view, what Quentin Destieu tells us with his sculpture, is that there are some historical turning points in our relationship to the machines. Without forgetting that the artist makes visible, and not legible, what is ordinarily invisible. He assures that this legendary microprocessor prototype is totally functional. 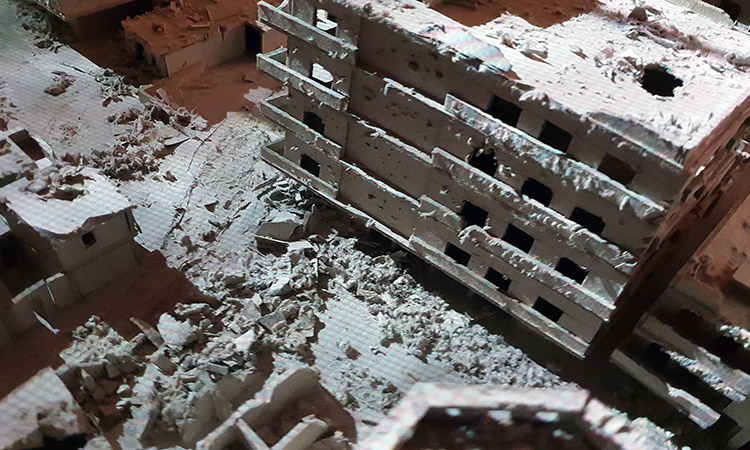 The leading exhibition of the Chroniques Biennial takes place at the Friche Belle de Mai de Mai in Marseille. Entitled Supervisions, it focuses on “attempts to take flight looking upwards”, where the esthetics of Alain Josseau’s artwork is unfortunately familiar because it brings to mind images of cities devastated by war which haunt our immediate memories. But it is a war in closed circuit that is happening in front of our eyes and the theater of operations is on a small scale. Cameras scrutinize models of neighborhoods or territories to broadcast in real time simulated television news. The ruins are deserted, and the speaker seems to be an avatar at the service of an artificial intelligence. We are the privileged audience of a war which has banned all forms of humanity. The actions and the decisions are purely automatized. The military, obviously, is very much concerned with autonomy that increases distance and authorizing zero killed, only for those who maintain a technological advance on their enemies. We also note that in the Automatic War installation, we hear voices describing drones having reached their targets for real. The fiction often aggregates fragments of realities. 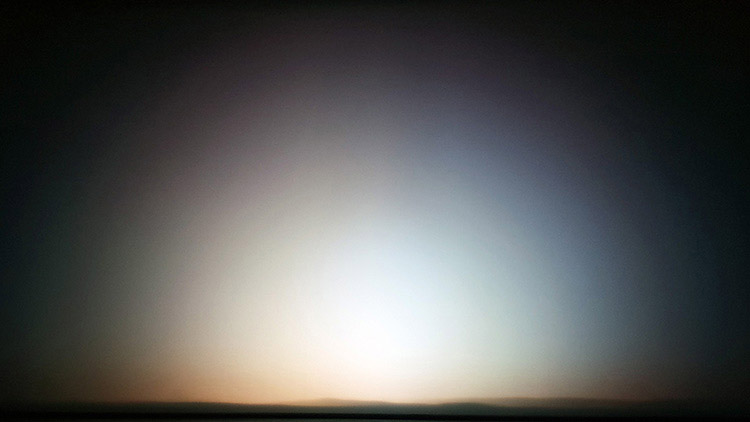 Finally, still at the Friche Belle de Mai, the Continuum audiovisual installation is one of the major pieces of this Biennial. It is the result of collaboration between emerging artist Félicie d’Estienne d’Orves, and Eliane Radigue, pioneer electronic music composer. The sound, with neither beginning nor ending, invites contemplation. It is the one of Koume (1993), third part of the Trilogy on Death initiated at the end of the 1980s and entirely composed on an ARP synthesizer. A music of drones which imperceptibly evolves over time. On the image, light evolves with the same slowness. We learn on the label accompanying the artwork that Félicie d’Estienne d’Orves, used to collaborating with scientists, used images captured on Mars as some sources of inspiration. The recreated sunset is elsewhere and we still do not know when a human will be able to experience it for real. And it does not matter because this experience can be lived here and now, listening to one of Eliane Radigue’s masterpieces which literally hypnotizes us. It requires an effort to extract ourselves from the continuum of this unreachable horizon. Because in art, there are two types of works: those requiring efforts in order to establish a relation of any nature, and those so immediately captivating that they require efforts to pull out.