The hybrid exhibition Metamorphosis Vol.2 at the Hyundai Motorstudio in Seoul is particularly well documented. To such an extent that it can be experienced via a virtual 3D tour, i.e. without having to travel to Korea. This is very much appreciated in these times of strict travel constraints. 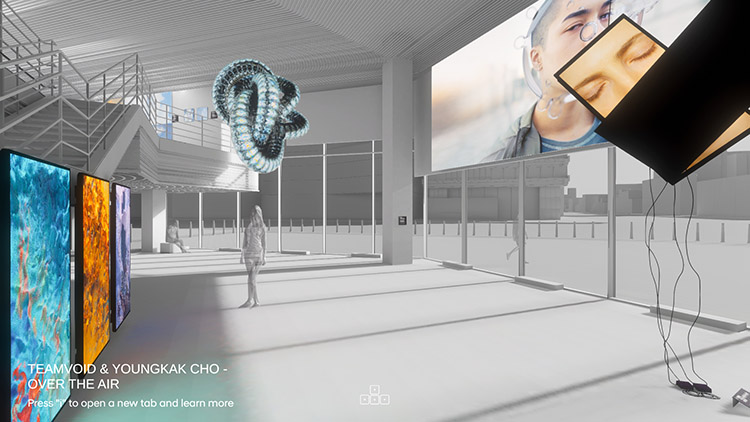 To consider that "the world is changing" is tantamount to positioning ourselves as observers, even though we are aware of our responsibilities with regard to the changes in our environment and in our society. The pandemic that has been restricting our movements for a year now reminds us that we cannot control everything. At best we adapt, considering that distance, for those who know how to grasp the technology of our time, is often only a concept. The health crisis that affects us all has at least the merit of revealing that we are ready to experiment with forms of ubiquity predicted by many science fiction authors. We have to admit that we have been preparing for this for a long time through attempts that have had varying degrees of success. And let us note that artists were among the first to grasp the creative and relational potential of the virtual and telepresence. One need only recall the rush of the artistic community towards metaverses such as Second Life during the two thousands. The exhibition Metamorphosis Vol.2, curated by DooEun Choi, Artistic Director of the Hyundai Motor Company in Seoul and Alain Thibault, Artistic Director of ELEKTRA Montreal, is about mutation, technology, art and the virtual. ELEKTRA is in fact the creator of the virtual 3D version that can be visited via a web browser, which ideally, should be seen using Chrome. 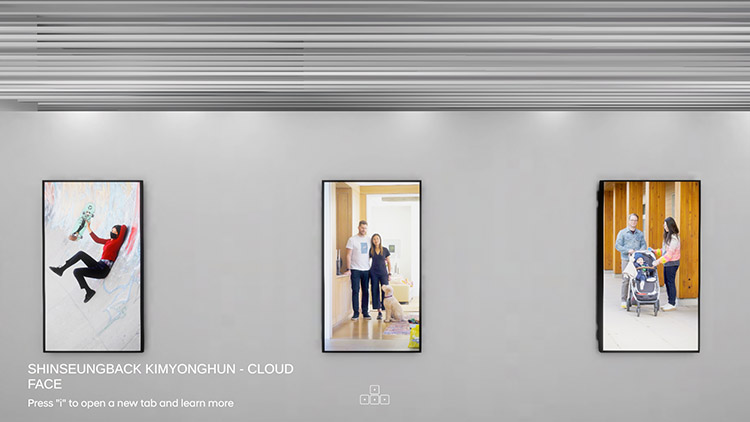 If our access to works of art has become somewhat more complex in recent times, it should be noted that there are also creations that have emerged from both isolation and distance. This is the case of the short video sequences in the Social Distancing Portraits series. Adad Hannah, its author, initiated it in his Vancouver neighbourhood at a time when Canadian Prime Minister Justin Trudeau was recommending isolation to all his fellow citizens. It is naturally on Instagram that the artist posts portraits of ordinary people filmed from a distance. Located on the first floor of the exhibition space, they pose alone or in groups, facing us. Impassive, their lives paused, they look at us. Their immobility is a perfect illustration of what is happening in many places around the world. The series was immediately a great success before being presented in an exhibition. This is hardly surprising, as we identify with all these people suddenly experiencing suspended time. Although it is shot through with a number of claims expressed through the use of signs, the succession of these appeased presences seems to us to be imperturbable. As if the general slowdown that we have constantly complained about had also been somewhat beneficial. 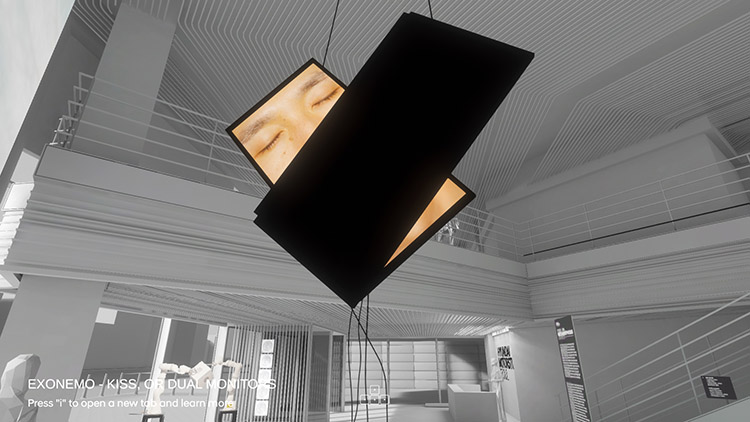 For art historians, the context of the creation of an artwork is obviously to be taken into consideration, whereas it is more the context of its presentation that influences the public's judgement. An installation such as Kiss, or Dual Monitors (2017) by the Japanese duo Exonemo is therefore expected to be interpreted differently when a pandemic forbids all forms of physical contact. The title of this creation consists of two parts: Kiss says that it is indeed an endless kiss between successive partners, while Dual Monitors describes more about the technological apparatus of the two screens facing each other. However, it is through screens brought closer together by the Internet that we are exchanging more and more frequently. A situation then comes to mind, that of stories in which the protagonists separated by a glass pane match their hands or mouths without any real contact. This is the complexity of the situation we are living through at the moment, as we have to reinvent customs that are well established in our habits, such as greetings with handshakes or kisses. It is interesting to note that while working from a distance has benefited the development of video calling services, social distancing has been equally beneficial to the trade in erotic accessories.

The bubble of intimacy 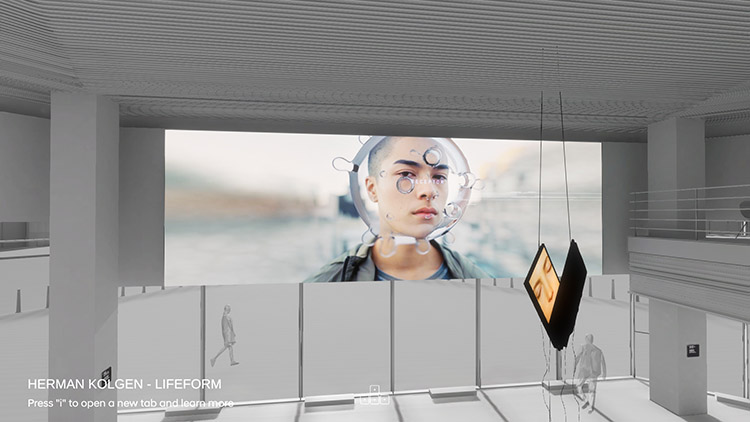 The living is at the centre of the LifeFORM film creation by the Montreal artist Herman Kolgen. It appears there as though it were under the observation of researchers in laboratories where data of all forms lead to scientific discoveries; places where imagery is the interface. And there is the presence of a bubble containing an infinite number of others occupying the bulk of the panoramic video image. A bubble which, according to the German philosopher Peter Sloterdijk, perfectly symbolises intimacy. Its metamorphoses are accompanied by squeaks illustrating the incapacity of the living to be contained. Lastly, there is the face of a young man who is staring at us despite the tensions that apparently agitate him. Until his head is covered with an intimate transparent sphere shape, a reference to these children with insufficient immune defences who are protected by being placed under a bubble. In other times, when the plague or smallpox extended the distances between survivors, we would have identified a nimbus around the young man's head - without knowing what made him different from the others. In view of his somewhat haughty self-confidence, he, on the other hand knows intimately what this is. 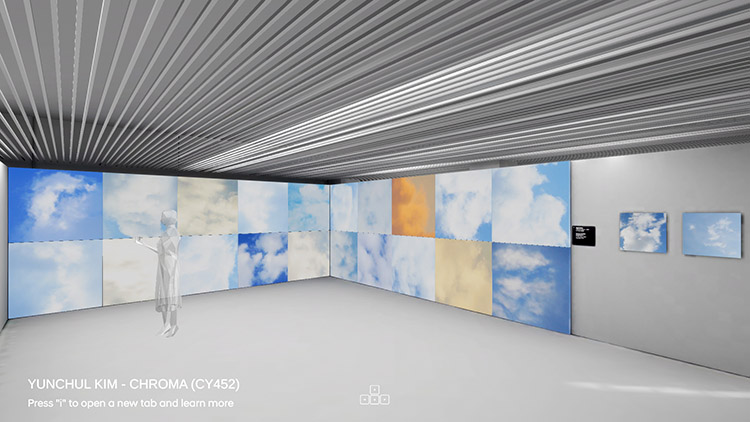 Imagination also means observing the world to magnify its intrinsic beauty, at the same time, considering the forces that move it. Alberti advised his apprentices to examine the roots of trees, while da Vinci encouraged them to examine moisture stains. In both cases, the aim was to identify some possible human or animal figures. This is precisely what the members of Shinseungback Kimyonghun do when they scan the clouds with a facial recognition application. Such applications are currently at the centre of many of the debates that are shaking up our societies from East to West. Using technology usually dedicated to security, if not control, the Korean duo, however, only appreciate errors, i.e. each time the machine ‘believes’ it recognises faces hidden in the clouds. The installation Cloud Face Real Time encourages contemplation. It is therefore likely that, on leaving the exhibition space, spectators will look up at the sky and see it differently. But this real-time installation, with a camera pointing at the Montreal sky, also tells us about the possible fallibility of the facial recognition algorithms that we increasingly rely on in transportation, pointing to the fact that every nook and cranny of our urban spaces is interconnected to myriad servers that make up what is very unjustly called the cloud. 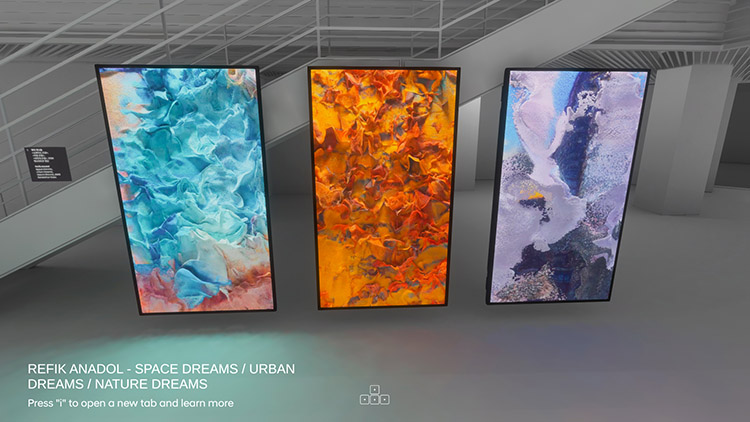 A triptych evoking American lyrical abstraction created by the Turkish/Californian artist Refik Anadol, welcomes us on the ground floor of the Hyundai Motorstudio. Its three screens are respectively entitled Space Dreams, Urban Dreams and Nature Dreams. The artificial intelligence application used by the artist has been fed with millions of images: views of space taken from the International Space Station, snapshots of large urban centres such as New York or Berlin and photographs of national parks in Iceland and elsewhere. The machine then computed flows, more than images, without the possibility of our being able to make any pronouncements on the nature of these same ebbs and flows in their extreme granularity. We can still recognize some figures, but we are instead invited to devote ourselves to contemplation, without knowing where these moving images will lead us. All the more so as the term Dream qualifying the three creations of the triptych encourages us to consider the possible reverie of a machine that has been left to its own devices. In many specific fields, machines surpass us, from chess to the game of Go. Thus, it is only with the imagination that one might still compete with them… until we follow the circumvolutions of Refik Anadol's work with their infinite variations. 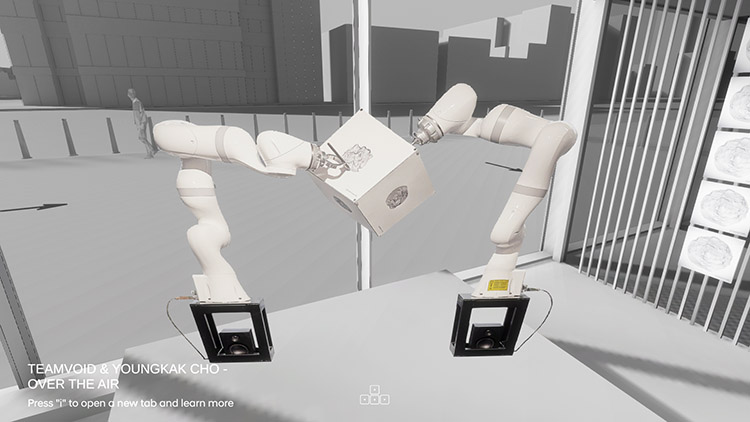 In the window, two robots are on display. They are from Kuka, a German company given to artistic collaborations. Their appearance is similar, but their roles are well determined: one presents a cube to the other who adorns it with drawings that we learn correlate with the qualities of air from elsewhere. It is difficult to interpret the drawings, which are captioned with the dates the data was recorded and the cities from which they originated. Their concentric appearance refers to the growth rings of trees corresponding to the successive outgrowth of wood of spring and summer. In both cases it is a matter of visualised data, in one case by machines, in the other by nature. Today, technology is no longer opposed to ecology. And if in the past certain technologies have been the cause of environmental disasters, others are now the bearers of ecological solutions for the future. The Jaquet-Droz automaton of the 18th century, which was the first automaton designed to draw, did portraits of the King of France. Those of the Koreans Teamvoid & Youngkak Cho have more responsible concerns. And even if we are not able to interpret the omens of their Over the Air installation, we know how urgent it is to preserve the quality of this air we all share. 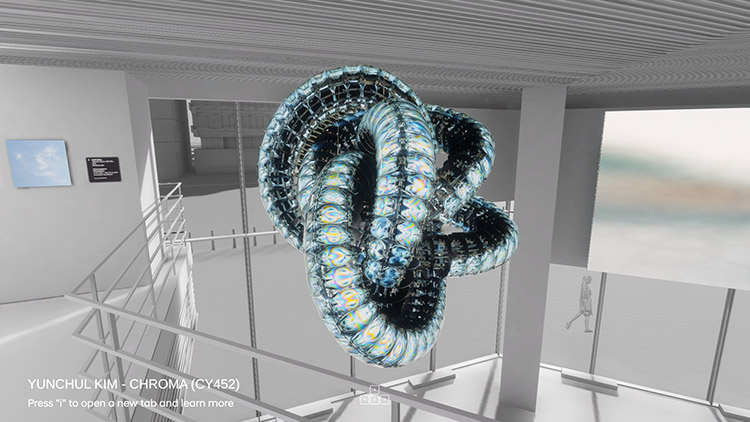 Lastly, there is a sculpture by the Korean artist Yunchul Kim which, although totally immobile, perfectly illustrates the idea of movement. Entitled Chroma (cy453), it appears suspended in time as well as in space, situated in that in-between space to which science-fiction cinema has accustomed us. Its animality is technological and its iridescent scales, which look like screens, are reminiscent of that other Korean, Nam June Paik who, from New York, changed the art of the 20th century. As for Yunchul Kim, he calls mathematics, and more precisely the theory of knots, into question. For our gaze, condemned to wander, follows the interlacing that makes up the work more than it encompasses it in its entirety. The installation Chroma (cy453) thus expresses movement as much as it requires those who wish to have a global vision of it to move around in space. Until one finally accepts its complexity. On the Google Arts & Culture website, we get caught up in the game of zoom in / zoom out in order to observe the smallest details of its perfect finish, so that we may have an intimate knowledge of it, without ever having touched it or even seen it, but with the memory of having moved around this sculpture paying tribute to the technical ingenuity of artists. And more broadly, to that of the human within the virtual space of the Hyundai Motorstudio.