The Ars Electronica Festival in Linz, Austria, was created in 1979. With this time frame in mind, Christine Schöpf and Gerfried Stocker, the two artistic directors of this year’s festival, have taken stock of the societal changes that digital technology is provoking and that art is amplifying. Because it is also by observing the past that we project ourselves into the future.

When doing nothing is creating 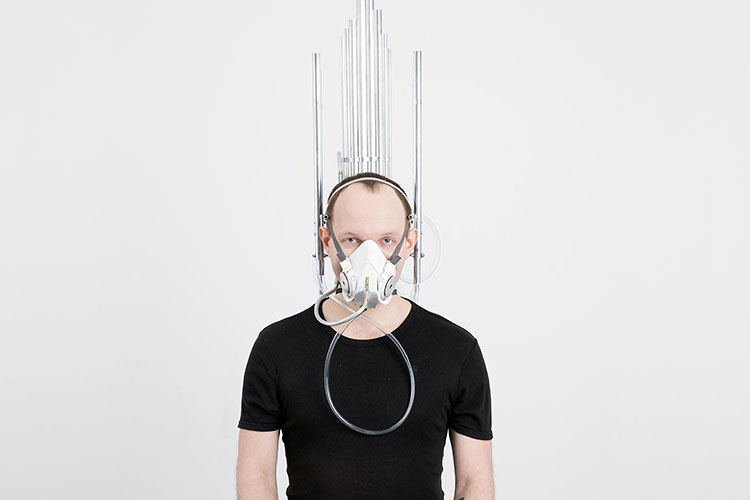 This was not the Russian artist Dmitry Morozov’s (aka ::vtol::) first participation in the Ars Electronica festival. The device he created to give the performance Last Breath, as part of the exhibition Human Limitations - Limited Humanity in the former postal sorting space of Linz renamed Postcity, is also not the first musical instrument he has conceived. But it could be the last he uses considering its title evoking the last breath. It is an instrument that requires the least effort since breathing, without any technicality, is enough to activate this kind of portable organ. The sounds that emerge, being digitally processed in real time, are quite harmonious. This sound performance, beyond its dramatic intensity, is interesting because it instantly makes the wearer of this breathing mask an instrumentalist. The idea being that, all of us and without effort, are potential artists that a non-action can reveal. And this, until the precise moment of our last breath.

When slowness reassures us 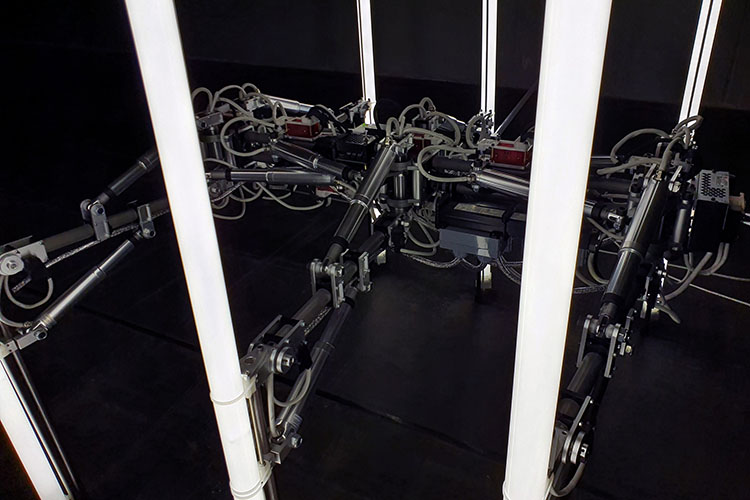 In the former Postcity bunker, we discover some strange mechanical creatures including Cryptid by the Australian artist Michael Candy who likes associating robotics and light. His creation having three pairs of legs, one immediately thinks of an insect while the metal of its articulations incite us more to see a robot. It moves with the greatest of slowness on its lower limbs of a white light, which is almost blinding. The slowness, despite its imposing size, gives it a harmless character. Opposite the machines of the American company Boston Dynamics the speed of whose movements among their other behaviours frighten us, it reassures us because its approach is hesitant. This robotic creature functions with contemporary technological means in a form of choreography and is thus a tribute to the slowness of a bygone era. Moving in a straight line from one point to another to simply go back, it carries nothing other than itself, unlike its fellow creatures who, frantically, run around carrying parcels in the gigantic hangars of e-commerce businesses. Its action, to a certain extent, is futile. Maybe that's why we like it. 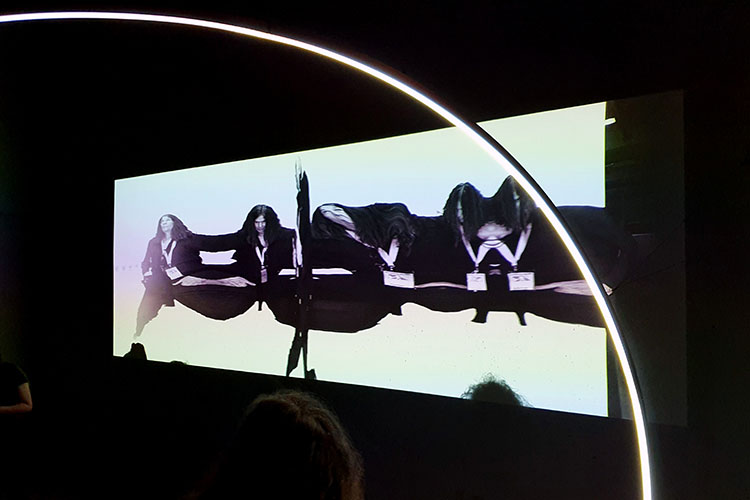 Ars Electronica often invites other structures that are also close to the relationship between art, technology and societal issues. This is the case again this year in the space dedicated to this type of invitation with the Elektra organization of Montreal, which presents the Liminal installation of Louis-Philippe Rondeau. As a participative work, it alone makes the event as its immediate environment is always full. An arc of light is waiting to be crossed. In doing so, anyone who plays the game, gradually enters the image. The entry being made gradually, it is a body deformed by time that the public observes. This idea that we can come in and out of an image has obsessed many directors of a cinema that technology, constantly, renews. The projected image, according to the Canadian artist, "inexorably shifted into the oblivion". For if, indeed, the image of Liminal unfolds like those of the scrolls of Chinese painting, it has, at least in appearance, no memory. Which makes it a work of the ephemeral ‘par excellence’.

The hybridization of the self 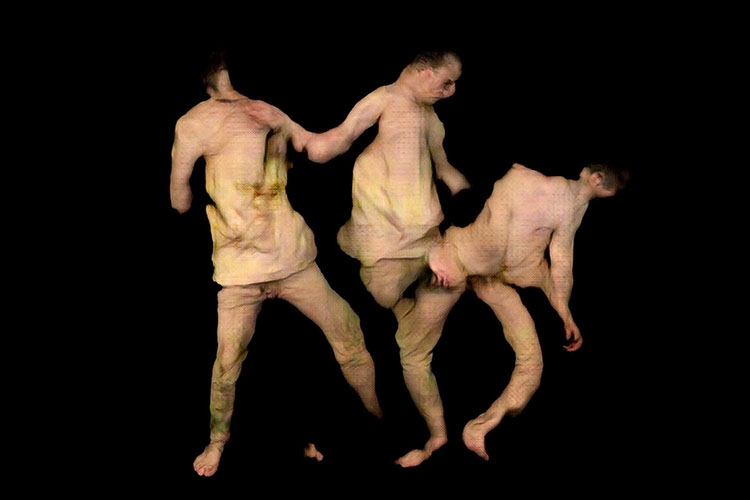 As the longest-lived festival that we associate with all forms of digital creativity, Ars Electronica also has the habit of hosting universities and schools. This year, for the occasion, the School of the Art Institute of Chicago has offered the commission of an exhibition of recent graduate students to Duncan Bass. It is in this context of emergence that we discover Doug Rosman's Self Contained III installation. Rosman began by providing an impressive number of images of himself by diversifying both his outfits and his postures to an artificial neural network so that the machine learned to calculate other versions of himself. Without any constraint from a physiological point of view, it imagined more images, which the American artist compiled in the form of successive animation sequences. In its approximations, unless Doug Rosman voluntarily complicated the task to test its capabilities, the algorithm also computed some monstrosities by hybridizing the artist with himself, without worrying about the viability of the bodies thus obtained. But here this only involves the rearrangement of pixels, in the era where the reassembly of genes is a reality.

A music of friction 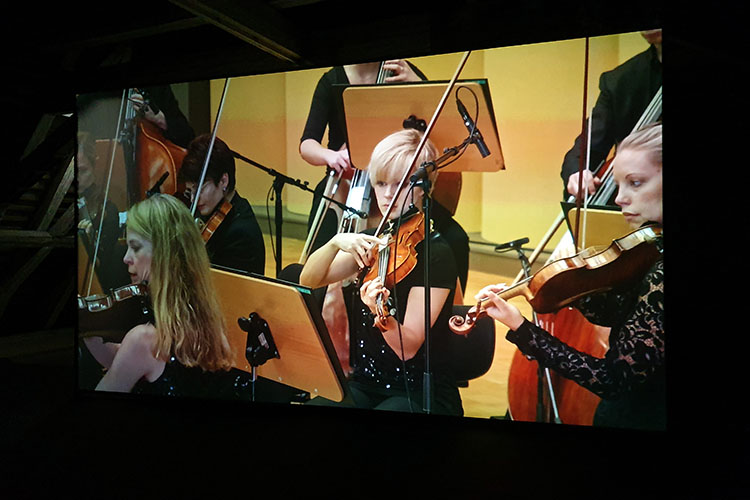 The Ars Electronica festival inevitably awards prizes, among other distinctions, as is the case this year in sound art awarded to the installation Muted Situations #22: Muted Tchaikovsky 5th by Hong Kong artist Samson Young presented at the Offenes Kulturhaus. It is more about sound than music, since the instruments of the performers of Tchaikovsky's 5th symphony have been prepared in advance so that no notes emerge. In the image, we recognize a symphony orchestra under the direction of its leader while the twelve speakers of the installation emit only the sound of friction. Sounds that music masks ordinarily but which, here, are the artwork. One can think of the Art of Noise that the futurist Italian Luigi Russolo initiated in 1913 as well as the famous 4’33’’ of silence by John Cage. There is, however, a real difference between doing nothing, or almost nothing, and playing a ‘neutralized’ instrument. Although in both cases it involves listening to the noises that, usually, are expressed only at the periphery of the music 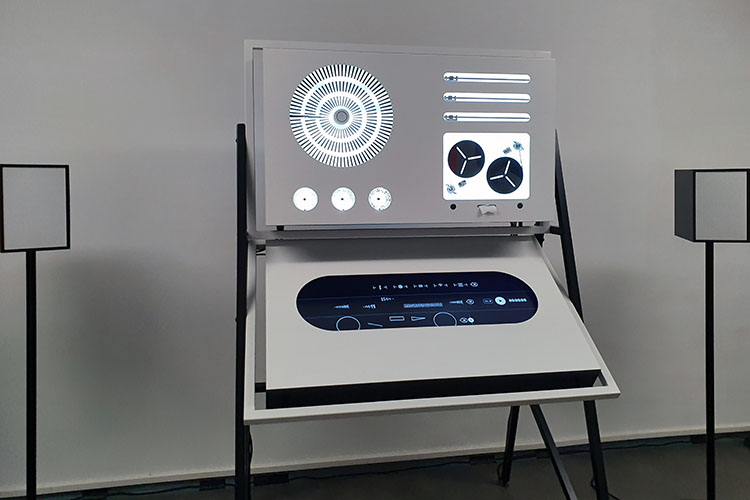 It is with a sound device combining analogue and digital by paying homage both to the famous composer Boguslaw Schaeffer and to the legendary Polish Radio Experimental Studio founded in 1957 that the members of the panGenerator collective from Warsaw won an honorary mention in sound art this year. A touchscreen makes it possible to visually assemble graphical elements which, in reading mode, play the analogue samples of magnetic tapes. The idea of correspondence inherent in the control of sound by form, again without particular technicality, is interesting. Not to mention that Apparatum reminds us of the essential role that was played by magnetic tape in contemporary music of the second half of the 20th century. There is also the design of this device which, too, seems to merge eras. Add to that that the public, after having composed and then played music, leaves with a strip of paper that looks like a receipt and on which is printed their graphic score with a QR code to listen to the music, online, in its digital format. 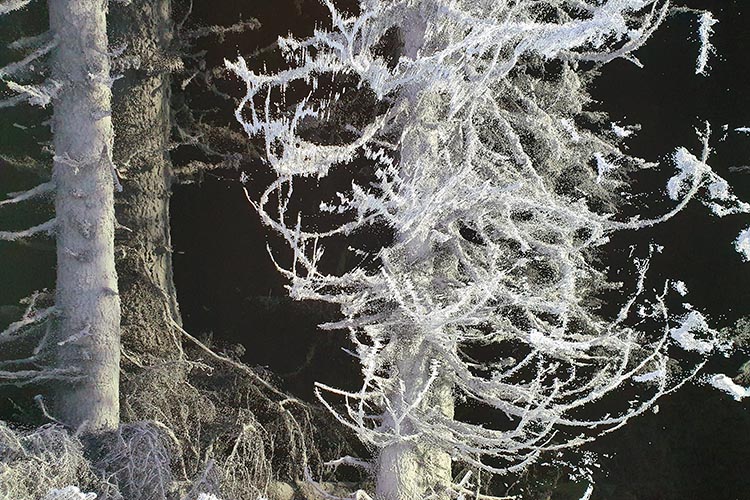 Cross the Danube to the basement of the Ars Electronica Center where two large scale prints of the Remains series by Quayola are presented. Hung vertically, they project us into a forest in the Joux Valley in Switzerland illuminated by the perfectly white light of the moon. The level of detail of the trees that surround us is that of the 3D scanner used by the Italian artist, who lives and works in London. The representation of landscapes in the history of art is closely related to inventions, such as photography. It is therefore natural that the emergence of 3D scanners of outdoor environments reactivates the landscape issue. The tree bark of the Remains series is "more real than life". Although there are also approximations providing a form of roughness to these three-dimensional representations whose particles also evoke pointillism in painting. As for the deep blacks, they correspond to the distant, or more exactly, to what escaped the scans of the apparatus. 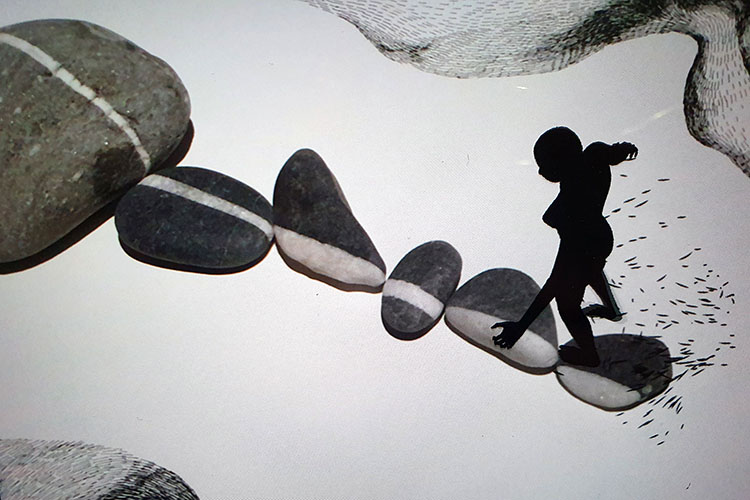 On the floors of the Ars Electronica Center, the exhibition dedicated to the work of the French company Adrien M & Claire B combines choreography and visual arts. Entitled Mirages & miracles, it consists of prints and objects augmented by tablets. The public, equipped with such windows opened on to a world of mirages and miracles, has access to the choreographies of performers, filaments or particles that increase the elements of this exhibition. The idea that one observes the world through a window refers to both the origins of perspective and those of cinema. The windows with which we are increasing our knowledge today are those of screens of all kinds that we end up forgetting. Just as we gradually forget that which a mediator has placed in our hands so that our experience of the world of Adrien M & Claire B is as complete as possible. Right up to the moment one no longer attempts to distinguish the elements of the physical space from the playlets succeeding one another by augmenting them through the screen.