Digital artistic practices are decidedly plural and their trends follow one another at the pace of technological innovations, currently with a strong enthusiasm for artificial intelligence and its “neural networks”.

The marvels of this artificial intelligence never cease to astonish us in many domains. It seems like magic to those who don’t know how it works. However, it is worth remembering that in reality machines don’t actually do anything more than what they are taught, although they do so perfectly thanks to the researchers who are constantly improving their algorithms, including those dedicated to the recognition and generation of shapes. 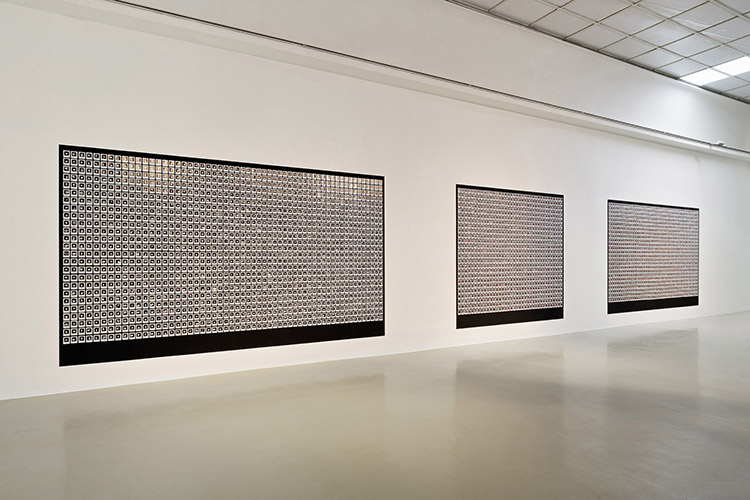 Many are the artists who are now taking on such technologies. In 2018 Anna Ridler initiated the project that would lead her to entrust the representation of flowers to a network of artificial neurons described as generative antagonists. Knowing that she would have to use a whole set of image data to ‘teach’ them to recognise—and therefore to design—tulips, she decided to photograph 10,000 of them during a residency in the Netherlands. Subjectivity isn’t the forte of machines, so the British artist went so far as to annotate all her shots, being better able to tell the difference between two shades than the most sophisticated artificial intelligence. Renewing the genre of the Dutch Golden Age still life, she photographs these flowers against a black background: a way for her to draw our attention to the fact that human tasks are essential to the proper functioning of intelligences that should be described as augmented rather than artificial. The photographic installation Myriad (Tulips), which is immediately seductive because of the repetition of its subject, also reveals the way in which machines learn, which, also proceeding by repetition, is no longer completely foreign to us. 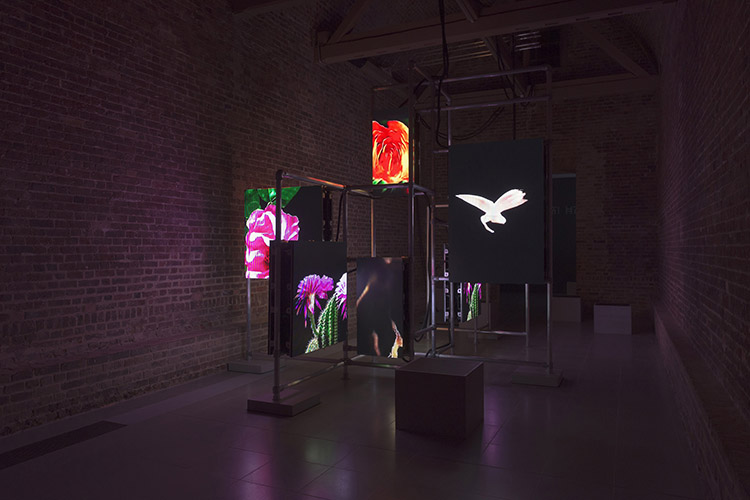 These artificial neural networks are inspired by the functioning of human cells, which has not escaped Hito Steyerl. In his installation Power Plants, presented at the Serpentine Gallery in London in 2019, and then at the Centre Pompidou last summer, flowers that we discover on LED screens do not exist, “yet”. So they can only evoke possible futures. The German artist has therefore imagined somewhat extraordinary powers for them. According to the fragments of poetic texts that scroll by, one of these flowers has the power to “keep trolls at bay”, which is very useful on social media, or to “make works of art fireproof”, which is very practical in totalitarian regimes that doncannot tolerate dissent. For politics is never very far away for Steyerl, who is interested in artificial intelligence for the scope for imagination it offers, in order to take it even further. In this case, artificial intelligence is to be considered as much in the process that makes the work as in the issues it raises. 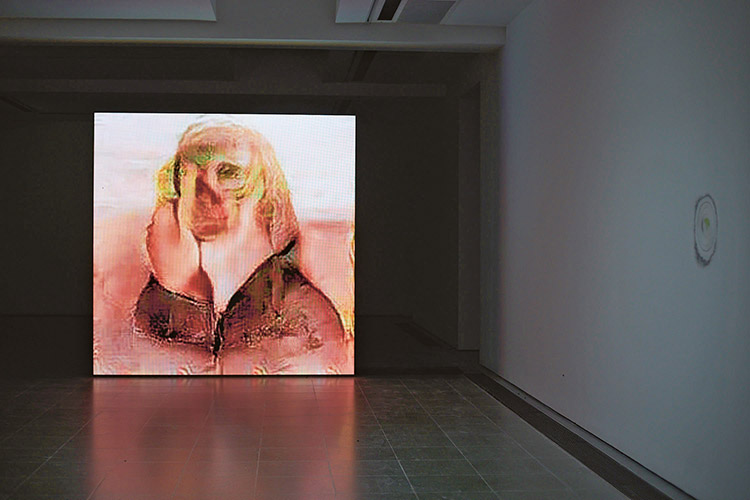 The idea that, since the 1950s, two intelligences have coexisted leads to their being compared or, better still, combined, as Pierre Huyghe did at the Serpentine Gallery on the occasion of his UUmwelt exhibition in 2018. He then collaborated with Professor Kamitani’s research laboratory in Kyoto, which captured the brain activity of a person thinking about images selected by the French artist. With deep neural networks fed by large quantities of images, this data participates in the creation and organisation of even more images. The interest in these uninterrupted flows, where we sometimes think we recognise them, lies essentially in the interpretation that can be made of such a collaboration between these two forms of intelligence: one human, the other non-human, if we omit the programming of its algorithms. It seems then that the machine, as if unable to fix its ‘attention’, is literally drifting, and that the short pauses it sometimes leaves are intended for human thought to catch up with it.

If there is one format that, due to the technologies implemented, is very widely used by artificial intelligence artists, it is the square: autonomous, in series or in a grid, as in the case of Memo Akten, one of the pioneers of this generative trend in art. Also common to such practices is the need for a source of large quantities of images to train deep learning artificial neural networks. In the case of the installation series Deep Meditations (2018-20) by this artist, originally from Istanbul and living in London, this is the sharing platform Flickr, where photographs number in the billions. Finally, there is the method of collection. Here it is textual, with a selection of images according to an indexing word: “universe”, “life”, “nature”... It is up to the algorithms to generate what they give us to see. The title of the work encourages us to let go of the perfectly universal infinite transition, where the images appear to be both consequential to the previous ones and generate the following ones. It is therefore difficult to detach oneself from it! 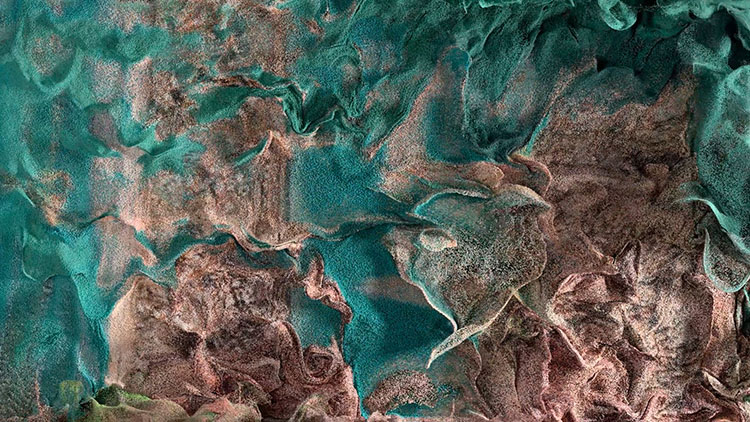 The notion of universality is very present when it comes to creations made with, and above all, by machines. This is no doubt due to their extreme computing power, which encourages us to consider them capable of embracing the world in its entirety. It has been known for decades that they learn, and that they now do so in depth, in reference to deep learning. The series of installations Machine Hallucinations (2019-20) by the American-Turkish artist Refik Anadol even suggest that they might ‘suffer’ from some pathologies of perception, so much so that they are ‘stuffed’ with information. These works consist of data sets from far away, including shots from the Mars Reconnaissance Orbiter and the International Space Station: images captured by machines for other machines to process. However, it is to painting that Anadol refers in generating what he calls AI Data Paintings in motion, thus considering the multitude of shots compiled by neural networks as an infinity of pigments. 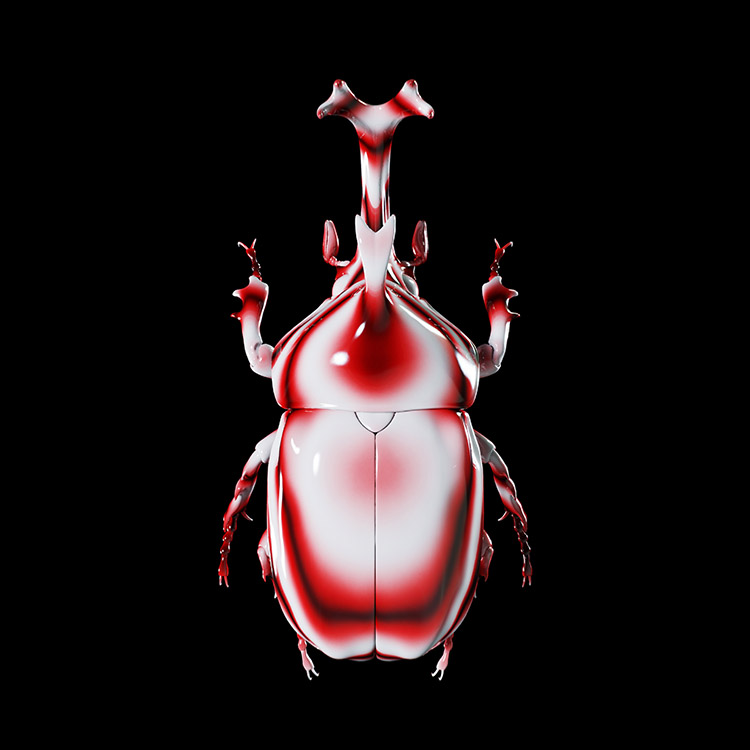 Pattern recognition is a branch of artificial intelligence that Frederik de Wilde is investigating this year with his online exhibition Next Nature_Post Camouflage. As computer vision devices proliferate, far beyond the industries where they first appeared, he looks for ways to fool them into thinking up camouflages, and he does so using artificial neural networks combined with evolutionary algorithms. The three-dimensional beetles he adorns with the resulting camouflage patterns make it impossible to see them as the work of any machine vision device with artificial intelligence. To the human observer, they are still beetles. The machine no longer recognises them as beetles. Artificial intelligence is used here against itself, reinforcing our ability to look at what a machine cannot see. The still and moving images in the AI Beetle series, presented on the internet, thus belong to a larger body of work associated with counter-surveillance, in an era when artificial intelligence is used to serve widespread digital surveillance. 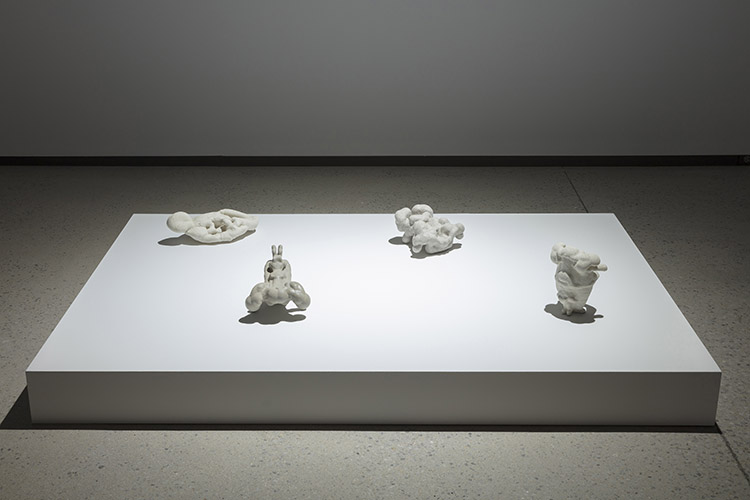 Grégory Chatonsky is one of the first French artists to have taken an interest in artificial intelligence, both in terms of the subject of his artistic research and the technologies to be implemented. In 2017 he used an artificial neural network of the recurrent type to create his Organisms series. This is fed with 3D models of living organisms of any kind or origin, so that the machine designs others, and the artist prints them. The sculptures can be seen as fossils of organisms that never lived on the surface of the Earth, while their grey texture evokes the lifeless dust layer on the surface of the Moon. We are therefore dealing with sketches of organisms that have no evidence of having been viable on any planet. For the imagination, even if it is artificial, knows no constraints. It is limitless, just as machines are today, in their learning as in their production, if we assist them, as the old masters guided their apprentices. 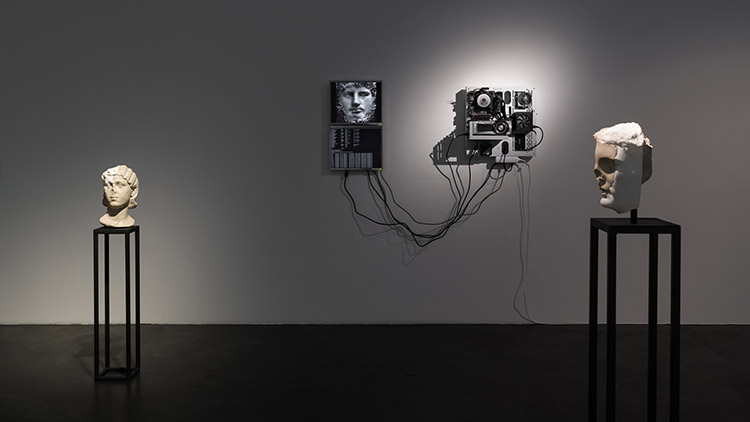 What if artificial intelligence made it possible to restore statues and ancient friezes by using what is known as machine learning? This was Egor Kraft’s starting point when he launched his Content Aware Studies project in 2018. The input is an artificial neural network fed with numerous scans of Greco-Roman statuary, and the output is installations that combine images and sculptures with technical devices. It is interesting to note that artists of his generation no longer hesitate to mention, or even stage, the technologies without which their works would not have existed. It is therefore with the idea of compensating for the absence of noses or broken limbs in ancient works that the project came to the mind of this artist living and working between Berlin and Moscow. The data set takes the place of the sculptor’s clay. The know-how is that of the machine that practices copying, as has long been the rule in sculpture. This intimate relationship between artificial intelligence and repetition on the one hand, and copying on the other, is likely to reassure us about the essential quality that remains the prerogative of artists, and more generally of humans: creativity.