On Combinations at Work

Artworks by the French artist Pascal Dombis are the results of myriads of lines, texts and images combined together, and the variability inherent in the different elements combined is taken care of by the computation of algorithms that he controls through machines. 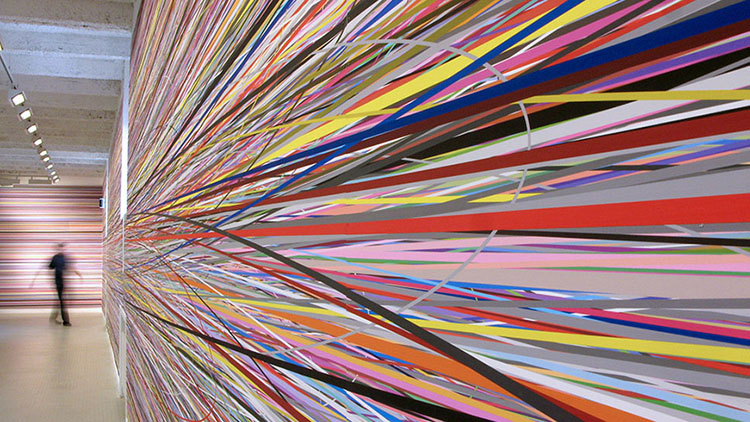 In the Essay on the Art of Combinations (1666) Leibnitz’s basic premise is that “it is possible to consider things, however numerous, and take the whole as one” before defining variability as the “quantity of all variations”. In the Irrational Geometrics series by Pascal Dombis, lines are stitched together in vast numbers, no matter what the nature of the media used might be, whatever their size, from a few centimeters to dozens of meters. When these “abstract forms” are “subjected to laws”, to use Hegel’s phrase in his Introduction to Aesthetics dealing with the concept of Beauty in Art, or more precisely when these abstract forms are subjected to algorithms conceived by the artist in his studio, long before software programs carry out the calculations systematically with a total disregard for the frames, soon virtually overwhelmed by their interlacing patterns. If the artist then grasps a hammer and a chisel to alter their ensuing circumvolutions, it is maybe to resume control over what is going offhand. In his glass pieces, for instance, some of the layers are cracked by hand tools that provoke new accidents, adding crackles into the medium that become companions on the potential vagrant routes that the code allows machines to take. 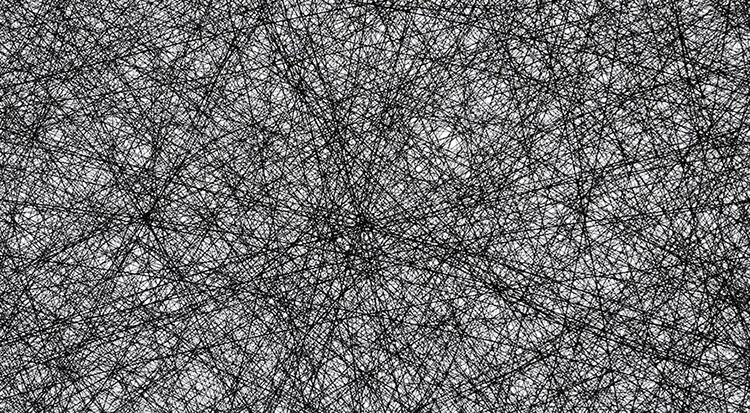 When you gaze at the works in the Meta-Aura series, you irresistibly get lost along their surfaces because our unquenchable eyes, alternatively blinded by lights and shadows, are never fixed. The prints crystallize the artist’s obsession to fuse the simplicity of forms with the radical nature of the process under way, endlessly repeating his curvaceous straight lines with discrete details, hardly perceptible. But with such a title, Dombis is also alluding to Walter Benjamin’s notion of the Aura. According to the theoretician, a work of art cannot be apprehended but in “the uniqueness of its existence at the place where it stands”. Dombis is working with digital media and although he knows better than anyone else how excessively reproducible they are, his art pieces are unique because they are precisely the results of generative processes that can churn them out endlessly. Their uniqueness is guaranteed by the artist’s choice, at the very moment when various materials generate them, in the very space where they reveal themselves to the world. 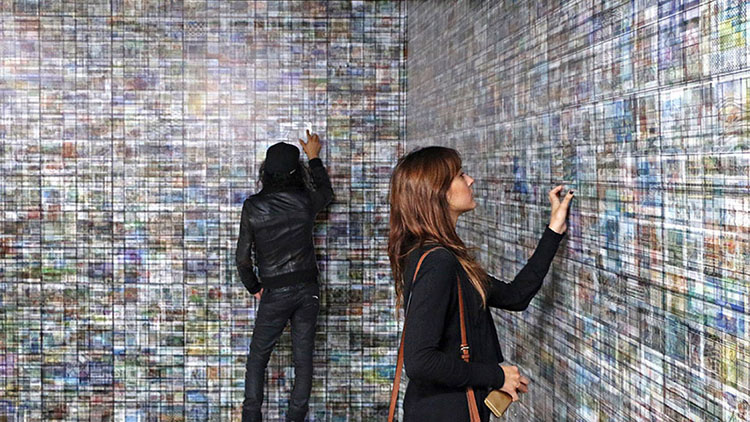 Rosalind Krauss wrote in her seminal essay on Grids: “In the early part of this century there began to appear, first in France and then in Russia and in Holland, a structure that has remained emblematic of the modernist ambition in the visual arts ever since. Surfacing in pre-War cubist painting and subsequently becoming ever more stringent and manifest, the grid announces, among other things, modern art’s will to silence, its hostility to literature, to narrative, to discourse”. Dombis has tracked down visual occurrences of the grid on the Internet and collected tens of thousands of them to cover the walls of the spaces where his participatory installation Mixed_Grill(e) happens to take place. When interlaced all together, these grids form a surface that the audience can scrutinize with the help of lenticular plates and probe in its multiple reading layers. Once again, the human hand has a key role in these installations because it hovers over the mural data bank while the lenticular sends us back to Andy Warhol’s first experimentations with this material in the Art and Technology Program set up by Maurice Tuchman at the Los Angeles County Museum of Art in the late 60s. This was of course a totally different era, but artists were already laying their hands on the technological novelties of their days. It is remarkable that Dombis inscribes his accumulative creative gesture within the pop art tradition in a post-Internet age, when making choices is left to machines. His grids or patterns are algorithmic but the original radical intention is still there because they represent an uncompromising alternative to linear narratives. 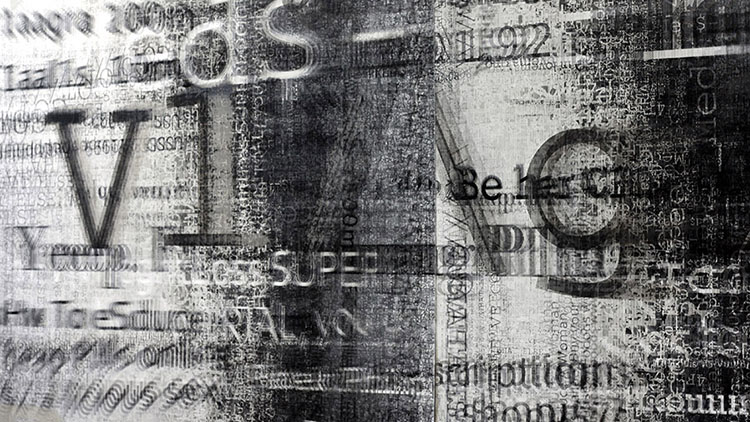 Yet, texts are most essential in Pascal Dombis’s artistic experimentations. He finds them in the depths of his machines where codes and algorithms express themselves, or in the servers’ data centres that he titillates with relentlessly repeated textual requests. He even goes as far as to collect hundreds of thousands of Google-indexed visuals simply because they would represent our everyday artificial intelligence. But what is the next search step once you have keyed 'Google' in your Google search engine? This somewhat hopeless quest speaks volumes for the artist’s capacity to test and feel – with a vengeance – the limits of the systems he has set up. In a split second, just before the 'silence' mentioned above by Rosalind Krauss is completed, the artist stops the search, beyond any form of excess. We are then no longer dealing with texts but with textuality or rather with some texture oozing from the struggle with language that is not so dissimilar to what Edouard Glissant writes when text becomes image: “Languages are our landscapes”. 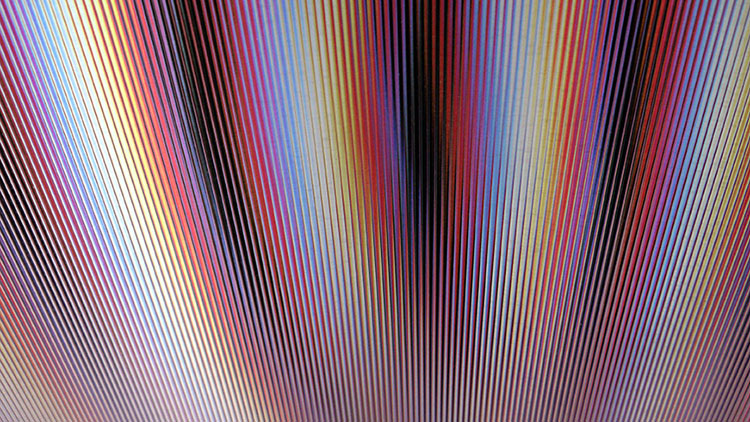 As early as 1998, Nicholas Negroponte said the digital revolution was over. In that context, how can we describe the all-digital society we live in with anything but the prefix –post? In this post-era, the machines that we were accustomed to blame for the errors they used to make have now become quite faultless. They have become less and less surprising or puzzling – that is to say, provided they are not in the hands of artists such as Pascal Dombis who revel in serendipity. He never knows beforehand, for instance, how the surfaces of his Post Digital Mirrors are to reflect the World. As a matter of fact, they do not reflect anything material but the accidents that the process never fails to get stuck into, when pushed to its limits. It could even be said that they do achieve the kind of silences that monochrome paintings achieve. The variability of the accidents taking place on the surfaces of his post digital mirrors makes them appear as folds, which sends us back to Gilles Deleuze’s philosophy and his interpretation of Leibnitz: “Chaos as such does not exist; it is an abstraction since it cannot be detached from a sieve/ a screen that makes something emerge (something rather than nothing)”. That 'something' is precisely what evades the artist’s control and even, sometimes, the machines. Its contours sometimes look like topographical curves indicating distances and exposing our determination to decipher what comes our way when we are in quest for the sublime. 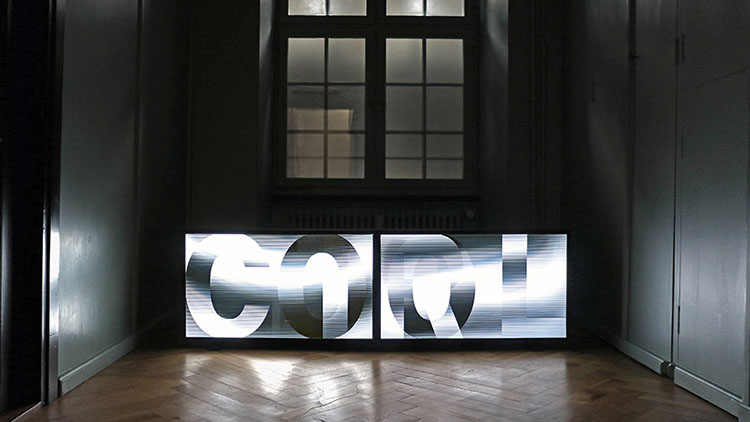 Writer and philosopher Eric Sadin now considers himself “partly a writer with a ’political purpose’, to use George Orwell’s beautiful phrase, and partly a whistle-blower who does not write out of a necessity to expose hidden reprehensible deeds that should be redressed, but as an intellectual enterprise consisting in identifying and regrouping scattered but converging signs that go against acquired democratic rights and encourage political crimes against human dignity”. Likewise, Pascal Dombis can be described as a political artist when he focuses on the notion of control in the digital age. Inside the inevitable white cube of contemporary art, he does not hesitate to blacken the surfaces of works, contextualizing them with the letters that form the word “CONTROL”. “We cut language to the bone”, says Syme in George Orwell’s 1984. Isn’t it what IBM and Apple initiated, long before Google or Facebook joined the wagon, when they forced us to use buttons that both control and delete? The sheer CTRL command key is enough to get Dombis’s art going. What Orwell could not conceive in his own days is now becoming reality because of our immoderate desire to reach Warhol-like fame and by giving away whole swathes of our private lives to corporate servers that, for the noble goal of building the best of worlds, earnestly and faithfully anticipate the fulfilment of our slightest expectations.

April 30, 2020 - Written by Dominique Moulon and translated by Didier Girard.