Art Brussels is one of the most important international spring fairs. It is an opportunity for discovering the new Kanal Centre Pompidou and for venturing into places that, like Senne, Société and IMAL, are participating in the artistic expansion of Brussels. 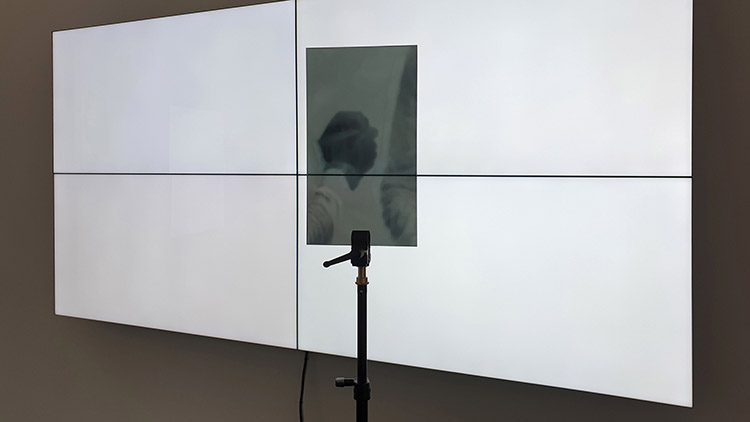 The Tour & Taxi site is where the Art Brussels fair has taken place since 2016 and where the booths are organized according to sections entitled ‘Discovery’, ‘Prime’ and ‘Rediscovery’. At the same time there are also galleries, including Harlan Levey Projects, that organize solo shows, which is where we discovered the installation VideoSculpture XX The world's 6th sense by the emerging artist Emmanuel van der Auwera. The installation consists of assemblies of video monitors, apparently without content, whose pure light gives them the appearance of white monochromes. But images, captured from a single point of view located in Las Vegas, are revealed through a few of these ‘windows’. These are grey-scale thermal representations which, no doubt, are more likely to be scanned by artificial intelligences. We move from window to window to reveal points of view giving us the few fragments of what took place or, rather, of what did not take happened on the day of the shooting. This is indeed the thankless role of CCTV cameras regardless of their technology: filming scenes without any particular action, waiting for the possibility of extraordinary happenings. 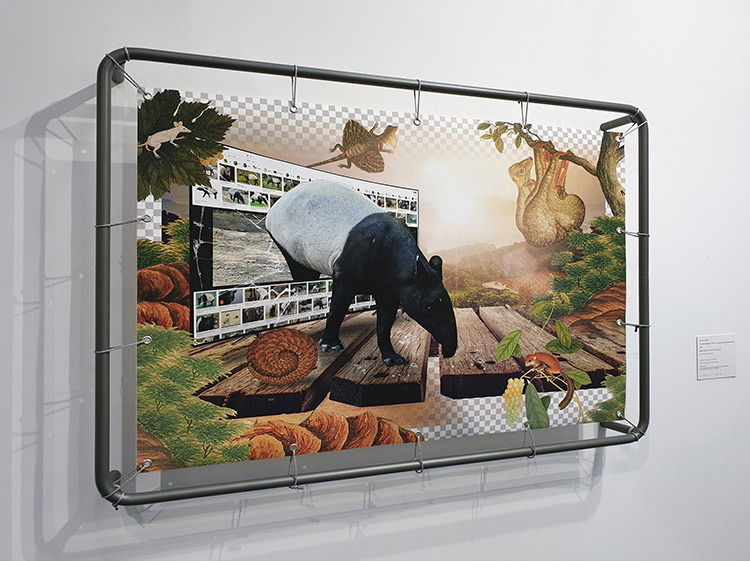 The Malaysian Tapir, recognizable by the white spot on its back and flanks, is the subject of the works of Chia Wei Hsu who graduated from the Fresnoy in 2016, represented by the Liang Gallery in a booth of the ‘Discovery’ section. The animal represented by the printed canvas titled The Adult Malayan Tapir is Surrounded by Mountains is literally emerging from a screen displaying the image search dedicated to it. Beyond the screen, the world of the tapir evokes the illustrated encyclopaedias that Google tends to replace. In the background meanwhile, we recognize the transparent checkerboard background of Photoshop, where there is a real possibility of assembling all images. Thus, the animal whose white spot evokes the giant panda, which is of equal interest to the young Taiwanese artist, is a link between the encyclopaedic works illustrated yesterday and the databases of all the pictures of the world, or between two accesses to knowledge whose techniques or technologies differ. Colonial companies of the past, such as the British East India Company, had to draw up an inventory of the diversity of the fauna and flora of the places in which they invested, soliciting artists, painters and illustrators. The art of representation was then a political practice, whereas today it is the power to control our access to knowledge. 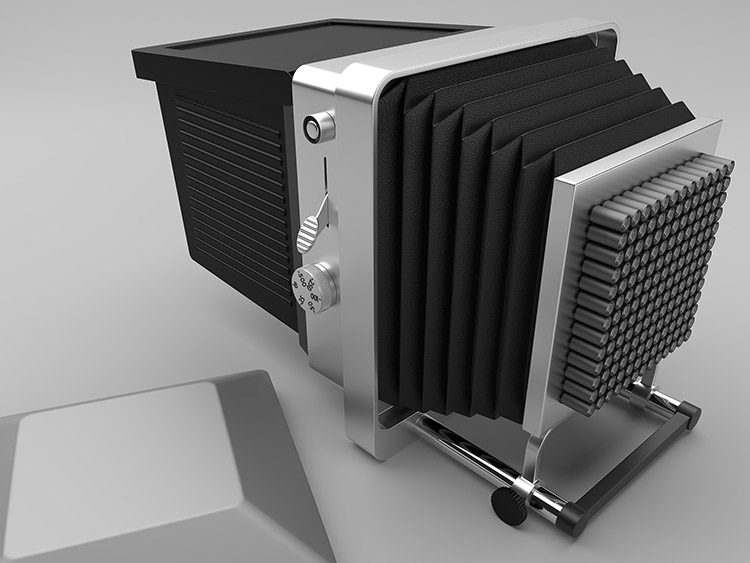 The recent work of Tamás Waliczky, who was selected to represent Hungary at the 58th Venice Biennial is presented by the Ani Molnár Gallery. The apparatus in the Cameras and Other Optical Instruments series are purely fictional although they have a real presence in the image. The perfection of their surfaces confirms the total absence of use. Yet, they appear to us fully functional without knowing exactly what they might serve. Some details refer to the past while others are more familiar to us. The extreme softness of the shades of grey that compose the images do not bear witness to any reality, but places them in a photographic register because designers, when they design objects in the studio before producing them in the factory, generally pay attention to colours. Computer-generated images, which Tamás Waliczky has been producing since the 1980s, have often been very colourful as soon as they appeared. The choice of black and white to represent cameras and other optical instruments, gives them a character of truth that the total absence of micro scratches, dust or particles, immediately contradicts.

An aesthetic of excess 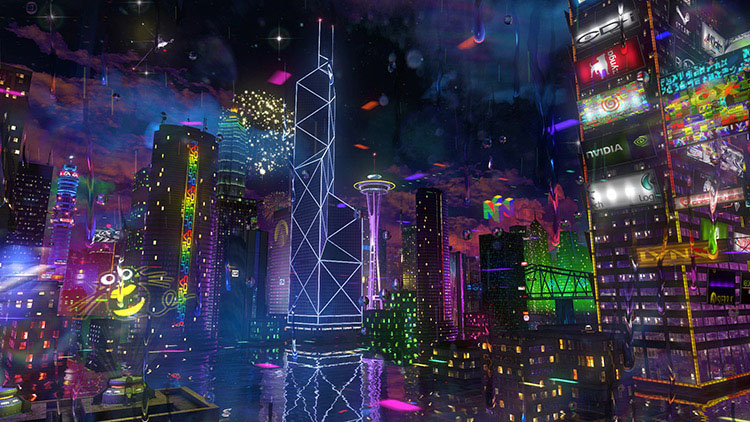 This year, video projects were grouped together in a section called ‘Screen It’. It is therefore comfortably seated on sofas within the Hotel de la Poste of the site of Tour & Taxi that we can view Tabor Robak’s 20XX sequence, presented by the Upstream Gallery. This is, in view of the world’s iconic skyscrapers he assembles, an ideal city inhabited only by the lights of the advertising signs of the video game industry. The relative darkness, contaminated by the saturated colours of the brand names, associated with the extreme density of both buildings and signs, gives it a somewhat oppressive atmosphere. Unless it is to express the computing power of microprocessors or graphics processing unit. Tabor Robak's aesthetic is that of excess as much as artifice. His software applications are those of motion designers whose visual aesthetic he plays with. The light filters that he unrestrainedly activates accumulate until they become the true subjects of the artwork. We should also mention the omnipresence, in the lens, of repeated showers that evoke the ‘Rain’ effect more than the rain itself. 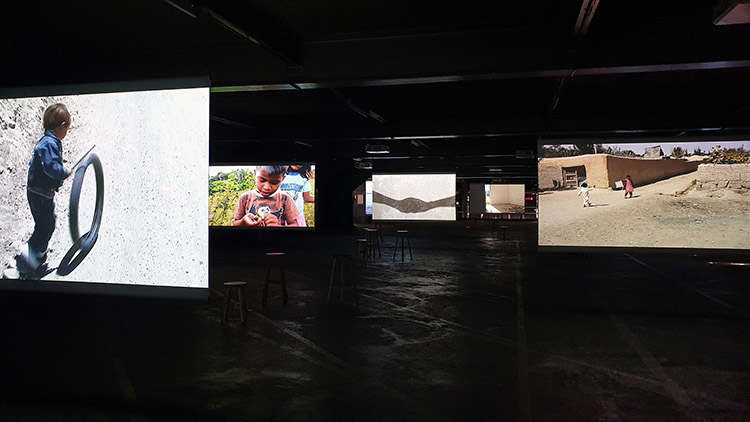 Leaving the site of Tour & Taxi, we head to the other side of the canal to the cultural institution Kanal Centre Pompidou which, in 2018, took over the former Citroën garage in Brussels. A place which is already grandiose prior to its future renovation, hosts a number of works like the video installation Children's Games by Francis Alys. The Belgian artist has continued to draw up an inventory of children's games since 1999. These same games, documented in the four corners of the world by video sequences, all take place in the street. With, most often, rudimentary (pebbles or sticks), common (chairs or coins), or objects of recovery (tires or fragments of mirrors)... The scenes take place in urban landscapes that armed clashes have sometimes ravaged, but the imagination of the protagonists still prevails. This is a form of sociological study whose poetry works through the extreme simplicity of situations. It is as much about preserving what tends to disappear from big contemporary cities where the consoles of an expanding industry have replaced children’s games. Accordingly, the installation Children's Games has every reason to be in a museum in which we must preserve ancestral practices by documenting them with contemporary media.

A window on to the world 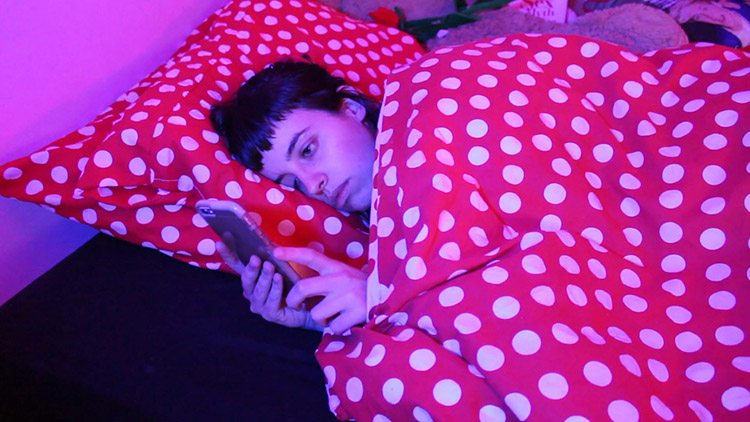 Each year, the independent venue Senne organizes an exhibition whose opening is held during Art Brussels. It is in the context of an exhibition called For Real that you can watch the video creation All I have is my phone by Molly Soda. The latter is in her bed, from the beginning to the end of the scene, whose pink and white polka dot pillow and quilt have a real presence on the screen. Although the subject, considering the title of the artwork, is more the phone, on which her gaze is entirely fixed. The cell phone, via the Internet, her real territory of expression, is the only window open to the world here. The decor, summed up by the bed in an interior that the New Yorker will not leave, recalls those many artists who did not feel the need to go outside to create. Starting with Van Gogh painting his shoes or his bed and Josef Sudek photographing The world at my window. Or when there is no need to browse the real to offer interpretations of it in the era when, for the artists of Molly Soda's generation, the Internet is at the same time a source of inspiration, a material of creation and a place of publication.

Between nature and artifice 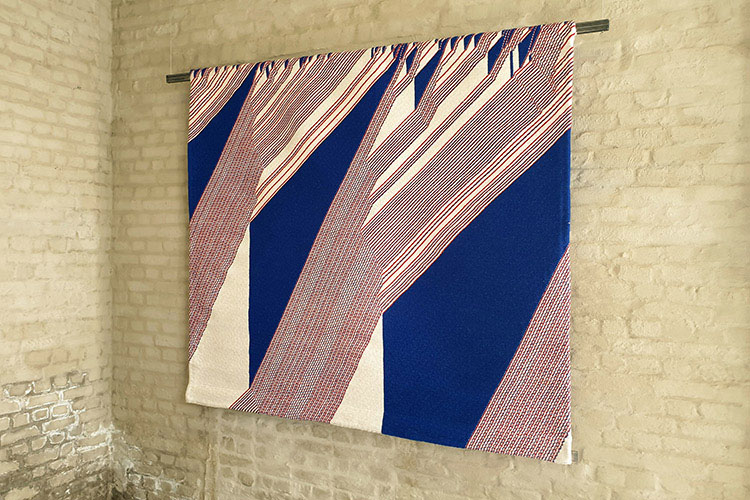 There are works that are appreciated both for what they provide us from an aesthetic point of view and for the more theoretical knowledge that they bring us. Thus, the piece Conus Textile presented by Sébastien Lacomblez in the exhibition Calculated Chance organized by the artist run space Société is one of them. At first glance, it is a tapestry from which we learn that the abstract motif comes from the interpretation, by the machine, of an algorithm inspired by a theoretical notion named cellular automaton that emerged from the research in the 1940’s of mathematicians Stanislaw Ulam and John von Neumann. Note that the latter is also considered one of the fathers of contemporary computing. But it is advisable, before continuing to return to the title, Conus Textile, of this tapestry with its abstract motif because it designates a species of shellfish whose patterns perfectly illustrate the functioning of a certain type of cellular automata. Mathematics is the link between a theoretical computer science and biological phenomena. But imagine our surprise when, pursuing our investigation between nature and artifice, we learn that the mollusc is also extremely dangerous as its venom, for which there is no antidote, is exceptionally powerful! 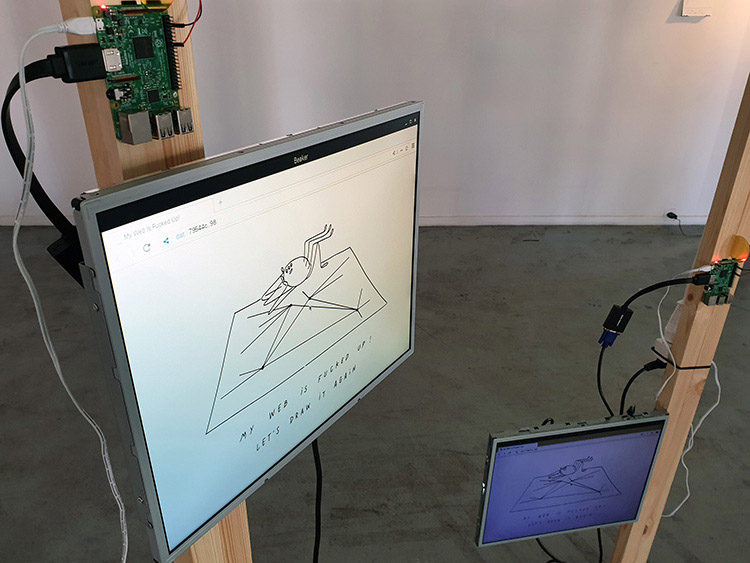 To end, we go to the IMAL, a centre for digital cultures and technology whose current renovation presages much more spacious premises. The artists Louise Drulhe & Raphael Bastide present here Renaming The Web. Louise Drulhe made herself known by designing a Critical Atlas of the Internet while Raphael Bastide is a strong advocate of sharing cultures and open sources. She drew the illustration where a spider exclaims, “My Web is fucked up! Let's draw it again”. He interconnected five computers with visible components that can alternatively display the same drawing through an experimental web browser allowing peer-to-peer exchanges that do not require any hosting. The idea here being to return to the Web of origins, not in its archaic aspect, but in terms of what it had that was truly participative, before the digital giants determined our uses while taking control of our data. Rethinking the Web without GAFA seems inconceivable today while we prefer to ignore what is behind our uses of today’s computers which, whatever we think, are ever more standardized.