While there has been technology in art since the late 1960s and artworks on the Internet since the mid-1990s, it was not until 2021 that the art market took notice following a few record NFT sales. Or how digital artists approach this new territory.

Non-fungible tokens, or NFTs, are nothing more than certificates of authenticity stored in registers secured by blockchain technology. Such ‘tokens’ are called ‘non-fungible’ because they are not equivalent to anything other than the works they are associated with. The latter are most often purchased in Ethereum, a cryptocurrency similar to the more famous Bitcoin. Transactions are made directly between artists and collectors on platforms that appeared in 2017. Some are accessible to everyone (OpenSea or Rarible) while others (Nifty Gateway, Foundation or SuperRare) are by invitation or by file. The hic et nunc (Latin for ‘here and now’) platform - whose name refers to Walter Benjamin's notion of authenticity - is more participatory. So, nothing very new, except that the NFT model brings together art, digital technology, Internet and rarity by connecting artists directly to collectors. It is the growing number of transactions, some of which have exorbitant values, that have recently attracted the attention of the art market. 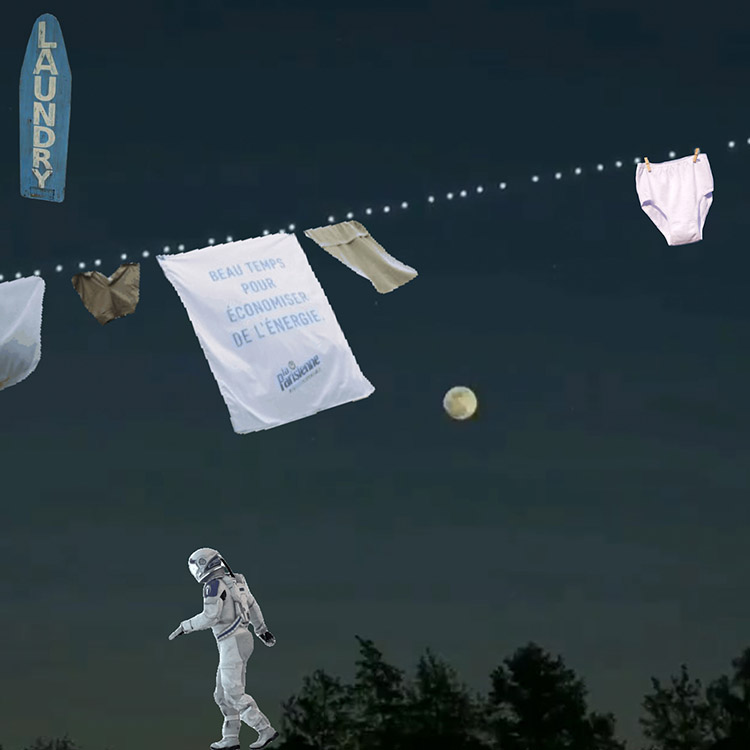 Albertine Meunier, whose attachment to the Internet and data is well known, quickly became interested in this new ‘crypto’ trend in art to the point of experiencing it as an artist and collector. She appreciates the SuperRare platform whose interface treats creations and collections equally. Practising appropriation, the artist has uploaded the animated collage Motionless panties on a satellites train. The astronaut in the foreground is a reminder of how fascinating the conquest of space still is - even in its commercial version represented by Elon Musk's satellites, which follow one another in the background of a starless sky like the carriages of a night train. The GIF animation is a continuation of another work, Dad Won't Come Back, which the French artist documents on her website as it develops. Claiming a form of thinking by doing, she learns from her experiences, like the founder of SpaceX, naming the recovery barges of his rockets with somewhat poetic intentions like Of Course I Still Love You. Yet this is the largest space colonisation operation ever envisaged. 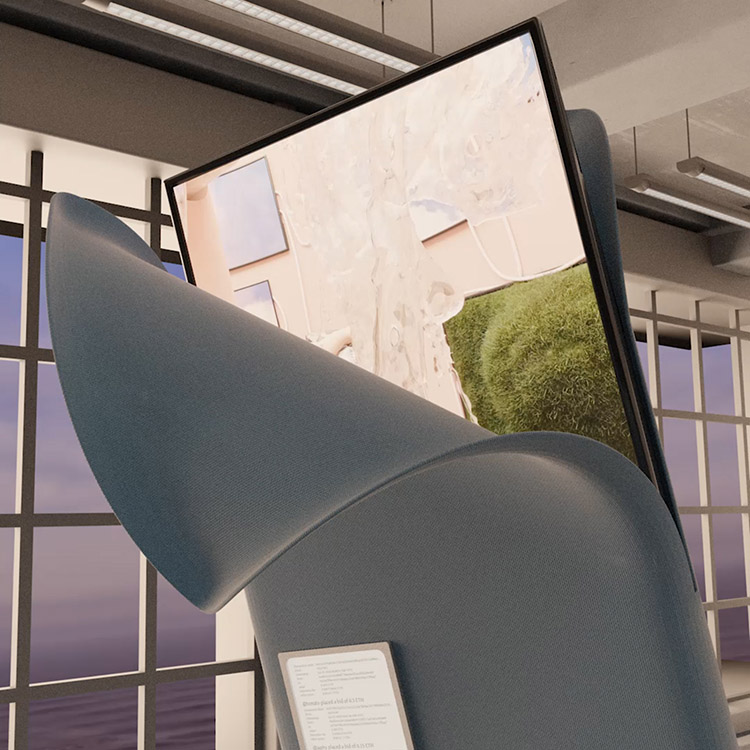 On SuperRare, there are only original works and, as on other platforms, all auctions may be consulted, although it is on Twitter that everything is played out in terms of communication and exchange. Baron Lanteigne has decided to integrate such information into the artworks he places on the platform. The platform thus participates in the subject of the work that it presents at the same time. The three-dimensional aesthetics of his MP4 animation loops oscillate between the real and the virtual through transitions where the technical devices of our daily lives literally liquefy. To the point that we no longer know what we are looking at when the tablets, among other screens that populate his images, are contextualised within reconstructed exhibition spaces. Accordingly, the caption of #metawork 2 indicates that it is a prototype whose aim is to allow the Quebec artist to visualize the integration of the pieces of his Tangible Data series in the real space of galleries and art centres. Here again, the platform hosts one stage of a work that is intended for the long term. 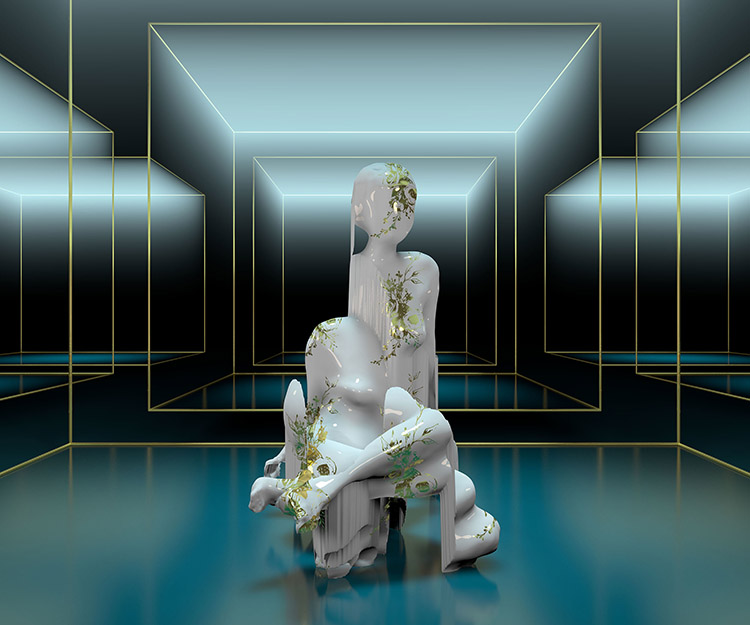 Foundation displays all its auctions in real time on its homepage. And we understand the importance of Twitter with regard to the highlighting of the accounts of artists who, like Sabrina Ratté, have a presence there, an indication of how communities of artists and collectors create value. On her page, the Quebec artist carries on a series entitled Monades with an animation loop. The body, which slowly distorts itself like an hourglass, evokes surrealism in painting, a trend in art that the use of three-dimensional applications reactivates. But this body is the image of her own, which she has meticulously photographed from all angles to obtain a virtual model with an obvious sculptural quality. In doing so, she invokes the 19th century practice of photosculpture, while being both model and artist. Here the space in which her self-portrait is presented appears particularly immaterial, as is generally the case with her work. It is worth noting that Sabrina Ratté offers the high-resolution files of her virtual universes to her NFT collectors, who are often satisfied with their online collections being visible to all.

Rafaël Rozendaal, for his part, has been associating works with domain names for some twenty years. And when a collector acquires one, his name appears in the title bar. His interest in NFTs is therefore not surprising, especially since he himself initiated a contract in 2014 to link artists with Internet art collectors. Note that artists receive a percentage every time the tokens of their creations are resold. But back to this Dutch/Brazilian artist who appreciates Foundation both for the quality of its community and for its interface grid of squares, which is a strong trend. His generally abstract approach to art is as geometric as it is colourful, while his titles are sometimes somewhat cryptic. With Fear of Choice, it's the idea of retreat or distance where the details always end up forming a whole that represents them. Or the idea, perhaps, that distance also makes it possible not to take a stand in this world of divisions. In the end, if there are successes in NFT that are difficult to admit, Rafaël Rozendaal's success on the other hand is due to the longevity of his research. 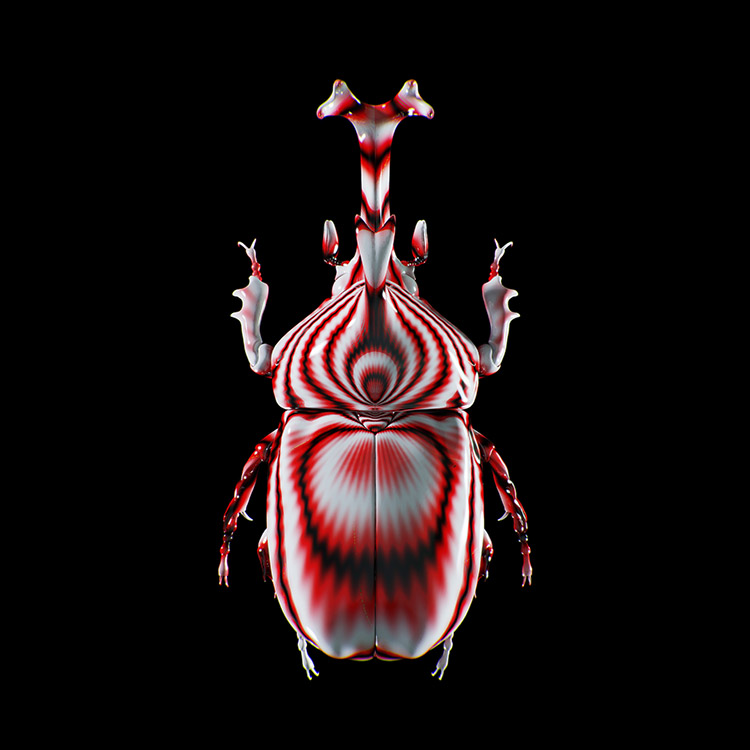 Like Frederik de Wilde, many artists opt for several NFT platforms. Though he accepted the invitation from Foundation, he has more creations on hic et nunc where the exchanges are done in Tezos. This is because he knows that this cryptocurrency is more respectful of the environment than most of its competitors, which have the defect, currently, of being large consumers of energy. Among his creations, we instantly recognise a few beetles whose saturated colour patterns raise questions. And yet, it is precisely what, as humans, questions us, that deceives the machine. The objective of the Belgian, experienced in the use of artificial neural network algorithms, is to invent a camouflage that would be able to handicap intelligent pattern recognition systems. In doing so, he practices a kind of counter-surveillance in the field of art. It is interesting to note that contemporary artists with digital cultures and practices who are not always in galleries are very naturally interested in NFT platforms. Logically, it is their culture and it is adapted to their practice. 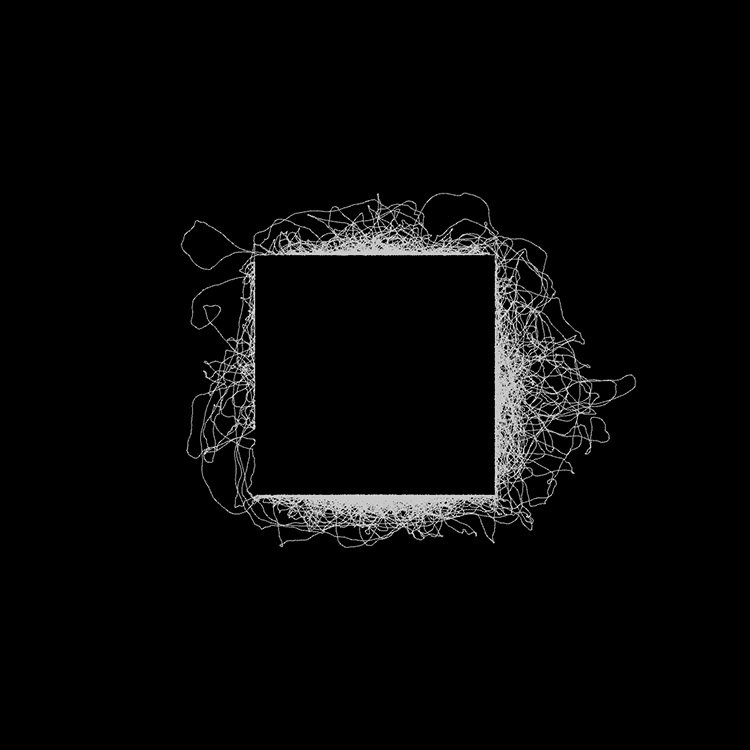 Hic et nunc is an open source platform that allows the integration of scripts in addition to still or moving images. This has not escaped Antoine Schmitt's attention, who presents Buy me !, an autonomous generative work that tries to attract shoppers with textual hooks. It says for example: "Save money! Collect me !" This is the Frenchman's way of making fun of artists who 'flirt' with collectors on Twitter. Buy me ! is surrounded by fifteen or so other black squares in PNG format within which we follow the wanderings of a white pixel that has been both attracted to and repelled by another black square in the centre. Antoine Schmitt fully assumes this attraction to the square. It must be acknowledged that modern and contemporary art has a very special relationship with this form which calls for abstraction and series. It is also interesting to note that the square is certainly the most common frame on NFT platforms. A situation possibly inherited from the Instagram grid that inspired many interface designers. 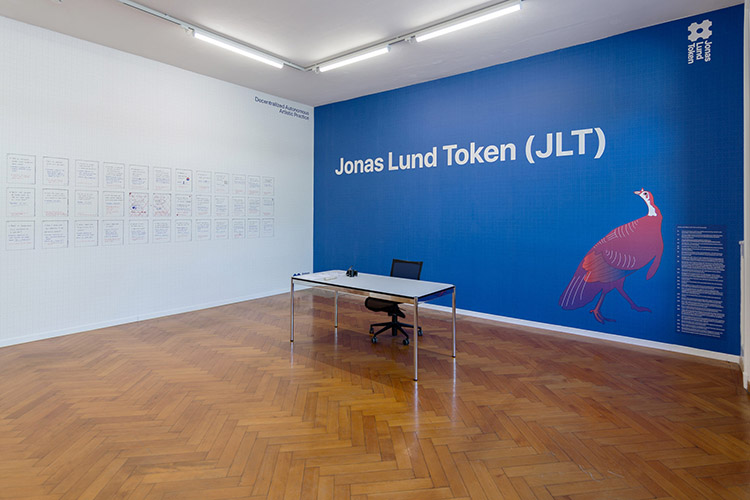 The artist Jonas Lund is quite critical of NFTs, which he considers essentially benefit platforms that charge artists for the use of the blockchain by collecting commissions on sales to collectors. So he created his own cryptocurrency: the Jonas Lund Token. This allows shareholders or investors to influence his artistic career. That is to say, he submits his ideas to a board of trustees, as in a company, before executing them when there is a consensus. It is therefore the artist's career that determines the value of the tokens of those who accompany him by validating the works or exhibitions that emerge from the project. And the Swedish artist notes that, while the NFTs speculative bubble was essentially fuelled by cryptocurrency speculators, the noise it generates has the merit of drawing attention to digital trends that the art ecosystem has not always been able to accommodate. Add to that the fact that the non-fungible token craze may be fading, though we're not yet done with blockchain, in the economy, in art, and in many other areas.

May 6, 2021 - Written by Dominique Moulon and translated by Geoffrey Finch.